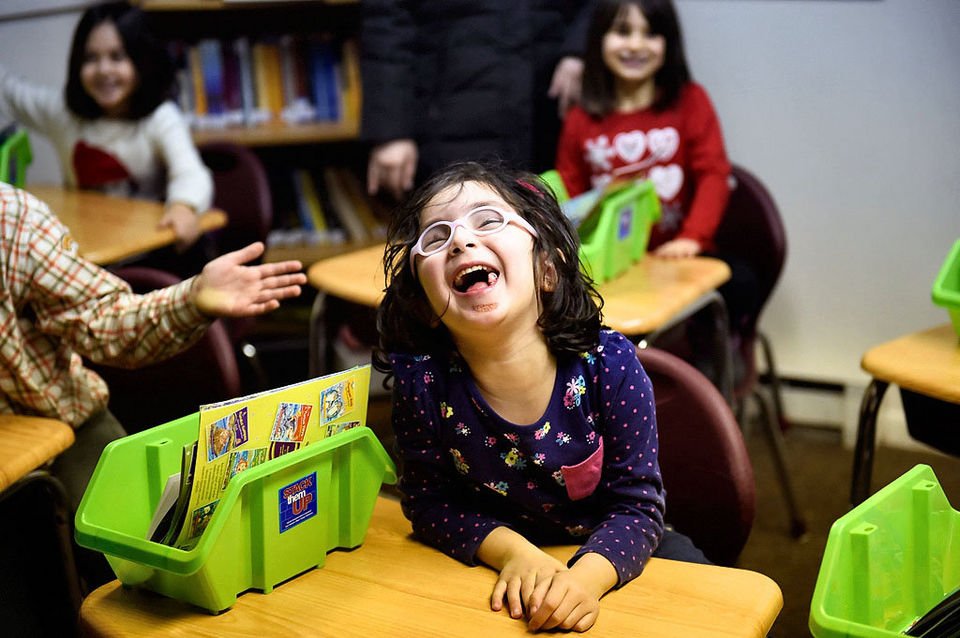 Turkish-American children come to the Turkish Cultural Center in Syracuse twice a week after school to learn their native language and customs. Nalan Ercanli, 5, enjoys one of their language drills. Stephen D. Cannerelli

Executive director Tim Saka says the center is a non-profit organization dedicated to promote harmony in the diverse cultural setting of the United States. Saka, originally from the Black Sea region of Turkey, arrived in the United States in 2000 to attend graduate school at the University of Colorado at Denver. That’s where he met his wife Lisa and they married in 2006. In 2013 they moved to Syracuse after she took a coaching position with the Syracuse City School District. They both became involved in the Turkish Cultural Center where he became its executive director in 2014.

‘One of the biggest benefits of the center is to help members integrate into the Syracuse community and to help celebrate and share their unique culture’ said Saka. Saka adds there are over 300 people in Syracuse who emigrated from Turkey. The center is involved with several other nationalities including people from Bosnia, Somalia, and the former Russian states. Saka proudly says they get involved with international relief efforts such as the blanket drive for Syrian refugees through Embrace Relief and the water well project in Kenya to provide clean drinking water. Nationally the center has spearheaded support for the victims of Hurricane Sandy and the Boston Marathon bombing. TCC also collaborates with Peace Islands Institute to offer College Mentorship program to youth and organize interfaith events like Abraham’s Table.

Saka says many of its programs involve and reach out to the general community. ‘Meet your Neighbors’ is a program where families affiliated with the center invite guests to their homes to have dinner together. The dinners build bridges between communities through an exchange of ideas and intercultural interactions while the guests enjoy Turkish cuisine.

The center at 320 Tracy Street also sponsors an annual Friendship Dinner, and trips to Turkey. Saka also said the center celebrates Turkish heritage with its members by having monthly cooking classes where Turkish women teach their peers how to cook Turkish cuisine, after-school tutoring to teach their children their native language. One of the most popular public events hosted by the center is the annual Children’s Festival at Syracuse City Hall to be held at April 23rd. The date was designated by the first Turkish President and coincides with the first day of their parliament.

Saka says the center is in the process of finding a larger location to provide even more programs for the Turkish community and its neighbors.