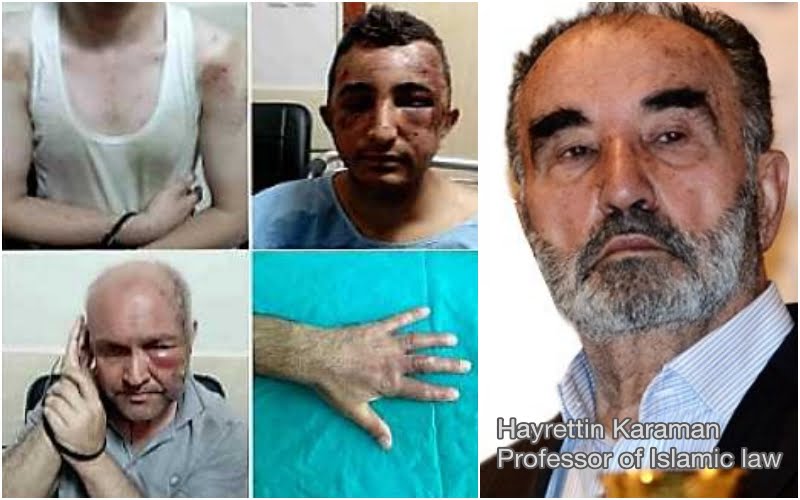 Turkish president’s chief religious counsel has given his approval to overlook torture and other crimes committed by members of security services, saying that Turkey is at total mobilization and under attack from within and outside.

Hayrettin Karaman, a professor of Islamic law who is known as Turkish President Recep Tayyip Erdoğan’s chief fatwa (religious edict)-giver and held in high esteem by the government, wrote today in pro-government Islamist daily Yeni Şafak that “no punishment can be rendered to soldiers who committed lesser crimes while they are fighting”.

“In these days, so many countries, people, institutions and such have been challenging Turkey with a bad intention to do harm in cooperation among themselves, and those starting with our president who love this nation and the country are battling against this attack as if they are in the spirit of mobilization with their lives and everything they got”, he wrote in his regular column.

Karaman’s blessing for ignoring crimes committed by police, military and other government officials, has drawn the ire of human rights defenders, and advocacy groups.

Turkish government has come under intense criticisms in the last several years for reintroducing torture, abuse and ill-treatment in detention centers and prisons.

Amnesty International (AI) said that it has credible evidence of torture in official and unofficial detention centers in Turkey following the failed coup attempt on July 15 that led to the detention of over 80,000 people with half of them formally arrested.

“Reports of abuse including beatings and rape in detention are extremely alarming, especially given the scale of detentions that we have seen in the past week. The grim details that we have documented are just a snapshot of the abuses that might be happening in places of detention,” said Amnesty International’s Europe Director John Dalhuisen in late July.

United Nations Special Rapporteur on Torture Nils Melzer visited Turkey between November 27 and Dec. 2, the first by a UN torture expert to Turkey since 1998, and said “Some recently passed legislation and statutory decrees created an environment conducive to torture.” The Council of Europe’s Committee for the Prevention of Torture (CPT) carried out inspections in Turkey between Aug. 28 and Sept. 6 but Turkish government blocked the release of the publication of its report.

This is not the first time Karaman has issued religious edicts approving wrongdoings in the government and to absolve responsibilities of Erdogan’s rule. The cleric, seen as Turkish equivalent of Muslim Brotherhood’s religious and spiritual leader Youssef Qaradawi, has approved the kickbacks taken by government officials in response to the exposé of mass corruption investigations in Dec. 2013 that incriminated Erdoğan, his associates and his family members in billions of dollars in bribes.

He also endorsed Erdoüan’s desire to secure super presidency by transforming Turkey’s secular parliamentary democracy into an executive presidency with no or limited checked and balances. Karaman likened executive presidency to Caliphate in Islam and said the best system is based on Islamic Sharia. “It is difficult for Muslims to preserve religion and culture under a secular order”, he maintained.

The cleric also came to the aid of Erdoğan when the president was heavily criticized by the US-based Islamic scholar Fethullah Gülen who lambasted Erdoüan on corruption, aiding and abetting armed Jihadists in Syria and stoking xenophobia in Turkey.

Karaman attacked the interfaith and intercultural dialog efforts long championed by Gülen in Turkey and abroad. Karaman wrote on Aug. 24, 2014 that Vatican’s real purpose for interfaith dialogue is to convert Muslims to Christianity, taking aim at Gülen’s meeting with Pope as part of interfaith dialogue.

He warned that millions of expat Turks abroad have been exposed to intensive Christian propaganda and criticized Gülen and other religious scholars’ engagement with Christian and Jewish groups.

It is vital for Washington and Turkey’s other international partners now to use all their influence to press Ankara to reverse course, to safeguards the rights of those caught up in the purge, and to strengthen rather than weaken the independence of the institutions that underpin it, including the courts, media, universities and parliament itself. The people who died defending it deserve nothing less.