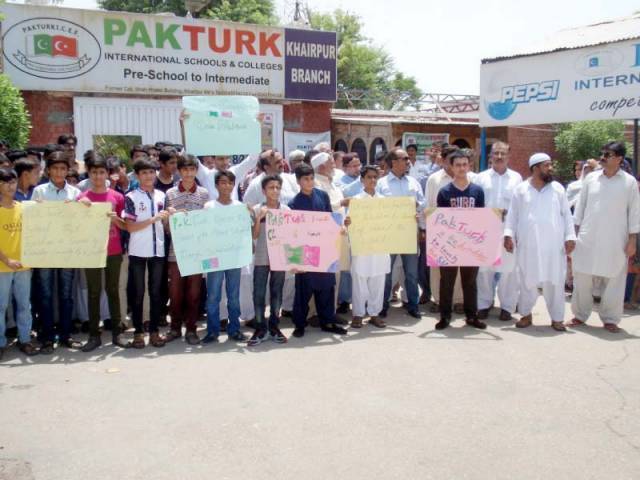 The students and their parents carried placards with slogans in favour of Pak-Turk School and expressed solidarity with the school management. PHOTO: EXPRESS

“There is no chance of Pak-Turk Schools being closed down,” Raja Muhammad Asif said while speaking to journalists during a ceremony on Monday. “Changes in the administration have been made and the 28 Turkish principals working for the school chain all over the country have been replaced with locals.”

Pak-Turk schools may not shut down after all

The ceremony was organised in recognition of the school’s position-holders in the annual Intermediate examination 2016.

“We were being pressured, but after several meetings with government officials it was decided that a change in administration and board of the schools would be made,” he added while clarifying concerns the Turkish schools would be shut down in the wake of an unpopular coup attempt in Istanbul.

Asif said there were concerns the Pak-Turk schools could be shut down after the Turkish government requested Islamabad to close down all institutes backed by Fethullah Gülen-inspired Hizmet movement.

The Turkish religious scholar, who lives in exile in the US, has been accused by Ankara of orchestrating the failed military coup on July 15.

After the putsch attempt, the Turkish government urged different countries, including Pakistan to shut down institutions connected to the Gulen movement. The Turkish ambassador to Pakistan had called on Islamabad to close down all institutions, claiming they were backed by the Hizmet movement.

“The principals of all the schools of the chain are Pakistanis whereas the Turkish nationals have been given consultative positions,” Asif said, adding that no decision has been made to send the Turkish nationals working in Pakistan back.  “We stand with our officials, who have been striving for education in the country and our results reflect their sincere efforts.”

The principal also rebutted reports that the school chain would be taken over by a non-profit. The school administration and board will remain under the Pak-Turk Foundation, which is a local non-profit registered with the Securities and Exchange Commission of Pakistan, he added.

Around 10,000 students are enrolled in the 28 schools and colleges of the Pak-Turk Foundation across Pakistan. Parents, teachers and administration of the Pak-Turk School had voiced concerns when it was reported the schools might be shutdown on the insistence of the Turkish government.

Both these students studied at the Pak-Turk school on 100% scholarship.

Joëlle Milquet, the minister of lower education for the French government, attended the opening ceremony of the Liege branch of the “Écoles Des Étoiles” (Schools of the Stars), which were founded by Turkish entrepreneurs in Belgium 10 years ago.