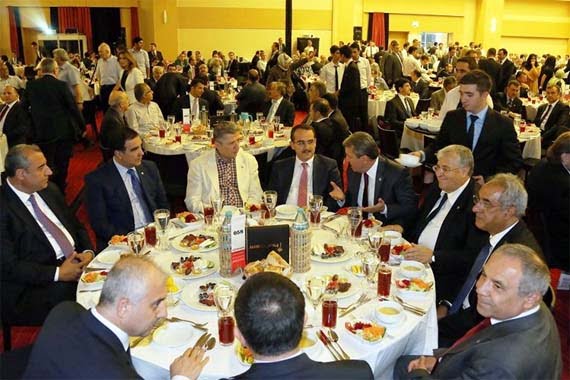 An iftar was held by the Journalists and Writers Foundation at the Congresium International Convention & Exhibition Centre in Ankara on Wednesday with the theme “Living Together.” (Photo: Today's Zaman)

The traditional iftar dinner held by the Journalists and Writers Foundation (GYV), this year held at the Congresium International Convention & Exhibition Centre in Ankara on Wednesday night under the theme “Living Together,” saw many distinguished figures, including spiritual leaders, politicians, artists, businessmen and journalists, call for living together in peace despite differences.

The evening began with a concert by a musical group and a welcome message from GYV Honorary President Fethullah Gülen.

Addressing the guests, GYV President Mustafa Yeşil also highlighted the importance of getting together.

Many of those present expressed their wishes for peace and tolerance. Justice Minister Sadullah Ergin underlined the importance of the dinner, hoping that Ramadan would be an opportunity to enhance ties with brothers.

The GYV was established in 1994, and the mission and work of the foundation are inspired by GYV Honorary President Gülen, known for his teachings of hizmet (service), tolerance and dialogue. The Turkish nongovernmental organization has two main principles: respecting differences and coming together. The foundation works to enrich humanity and enhance the culture of coexistence by undertaking projects that emphasize dialogue, mutual understanding and tolerance to establish global peace. It is also interested in the issues that concern journalists and holds discussions of topics such as democracy, human rights, laicism and globalization.