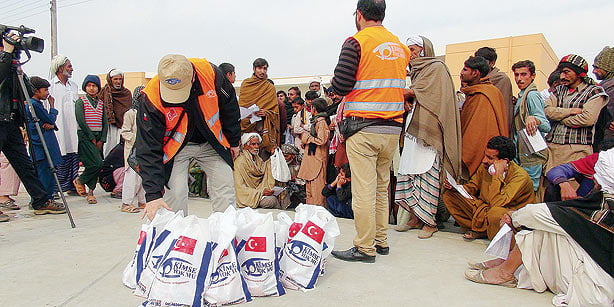 Speaking to Today’s Zaman, Hüseyin Fazlıoğlu, vice president of the Kimse Yok Mu charity, said that with its more than 50,000 volunteers, the charity will surpass last year’s meat distribution amount at this year’s Feast of the Sacrifice (Kurban Bayramı) — a religious holiday celebrated by Muslims worldwide each year in which an animal is sacrificed and a portion of the meat is donated to the less fortunate.

“Media attempts to malign our charity are upsetting, but they are far from affecting us in a negative way. This year we will reach out to more needy families than in previous years. For example, we are planning to help more than 80,000 needy families in the country,” Fazlıoğlu said. “We also have plans regarding the Syrian refugees who currently reside in our country. We will carry out distributions in Nizip, Gaziantep, Kilis, Yayladağı and Reyhanlı [where large numbers of Syrian refugees reside]. Hopefully, we will distribute meat to more than 4,000 Syrians,” Fazlıoğlu continued.

The Kimse Yok Mu charity, which is affiliated with the faith-based Hizmet movement, has become the latest target in a battle launched by the Justice and Development Party (AK Party) government against the movement, as several pro-government media outlets have been carrying out a smear campaign, with publications accusing the charity of engaging in illegal fundraising activities, despite a lack of evidence to that effect.

Yusuf Yıldırım, who is in charge of foreign aid at Kimse Yok Mu, said that the act of sacrifice will be performed in designated places under hygienic conditions, accompanied by a Muslim religious official and a veterinarian, and in accordance with the rules of Islam.

“The animals will be brought to the slaughterhouses one day before the festival. We do not proceed with the slaughter without the presence of a Muslim religious official and a veterinarian. When the slaughter is finished, professional butchers and veterinarians inspect the meat. The names of the owners of the meat are registered in the presence of a notary public. When this process comes to an end, we send text messages to the donors and inform them about the process.”

In addition to Kimse Yok Mu, other aid organizations such as the Cansuyu Aid and Solidarity Association as well as the Deniz Feneri Association will send the meat of sacrificed animals throughout the country and the globe.

Deniz Feneri Association representatives said they are aiming to distribute the meat of sacrificed animals to 100,000 needy families in most of Turkey’s 81 provinces in addition to more than 100 nations around the world. Moreover, the Cansuyu Aid and Solidarity Association will distribute meat to almost 1 million people who live under poor and unhealthy conditions in many countries including Iraq, Syria and Palestine, where water scarcity and insufficient nutrition have created growing and long-lasting problems.