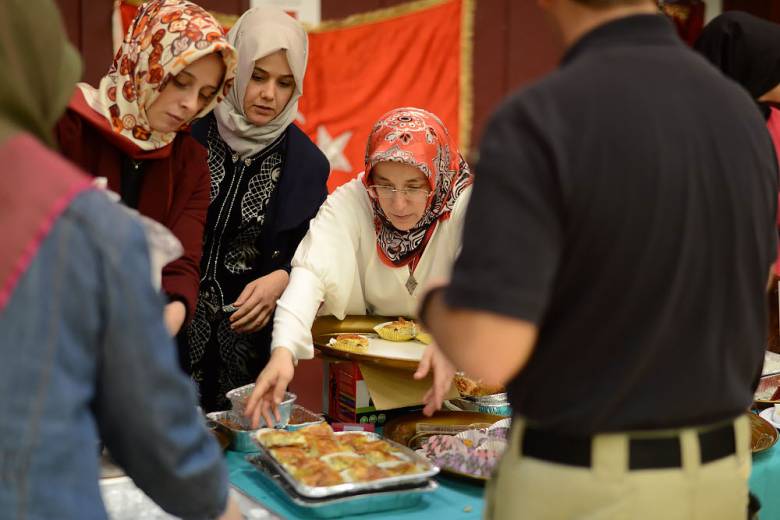 Women stop by the Turkish Cultural Center at the festival at Clifton High School on Saturday, Oct. 15, 2016. Photo: Carmine Galosso

Joanne Gursky has lived in Clifton, USA, for the better part of 68 years, Sumeyra Yesilova arrived from Turkey just about a year ago, and both women on Saturday happily celebrated the city’s diversity at a festival that drew hundreds of people.

The city was incorporated in April 1917, supplanting Acquackanonk Township, the largely rural area surrounding the City of Passaic and abutting Paterson.

The back of Joanne Gursky’s shirt, which read “I’m a part of Clifton History” was no lie.

Gursky has lived in the city for the better part of 68 years, beginning in the post-war building boom that swelled Clifton’s population.

“I like to see this,” she said, surveying the dozens of people taking advantage of the varied ethic offerings. There was Philippine barbeque and samosas from India, empanadas from Colombia and honey from the Ukraine. Gursky was getting a Hungarian crepe.

The city, which has nearly 86,000 residents, is among the most diverse in the state and has large Latino, Middle Eastern and Polish communities.

“I feel comfortable here, there are a lot of Turks and Arabic speakers,” said Yesilova, whose English was nearly impeccable.

The festival featured Ukrainian, Filipino, Colombian and Palestinian dancers, Calypso from Trinidad and Tobago and a Japanese drum and flute troupe.

Elaine Yaccarino has lived in the city’s Montclair Heights section since 1974 and she was heartened by what she saw in her hometown as compared to the sometimes divisive national political discourse.

“At this time in our country, the way the politics are, this is a wonderful way to bring the culture of so many people together,” Yaccarino said. “It’s wonderful you get so much richness and appreciation of how we are more the same than different.”

“This is a beautiful picture of worlds coming together,” said Anita DeVos, who grew up in the Dutch Hill section. She is Puerto Rican and her husband is Dutch. “There’s just so much diversity … and you can get such good food, too!”

Several other events are planned to commemorate the centennial, including the opening of a time capsule on April 26, 2017 and a parade on May 21, 2017.

The news that Turkey will officially request that the United States extradite Turkish Islamic scholar Fetullah Gulen is threatening to strain U.S.-Turkish relations. Ankara insists Gulen is behind a conspiracy to overthrow the government. But analysts warn that Ankara may find it difficult legally to secure his extradition.