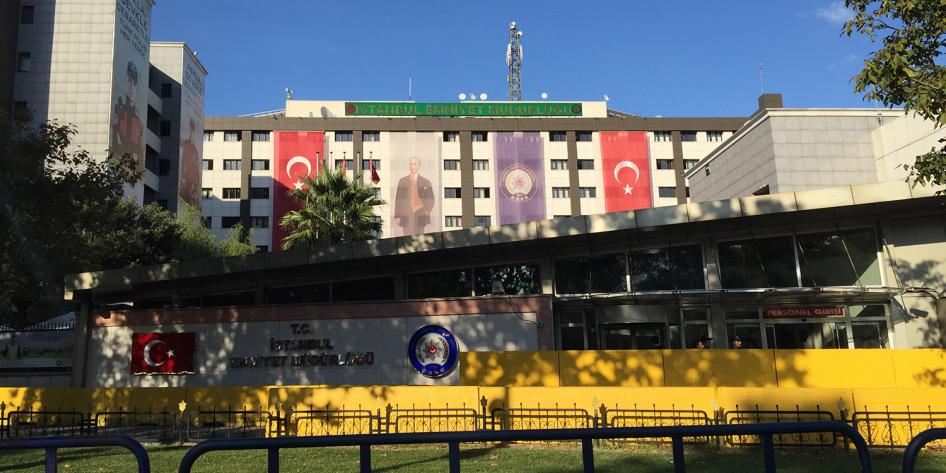 The Istanbul Security Directorate in Vatan Street where some of the cases of police torture and ill-treatment documented by Human Rights Watch took place.

(Istanbul) – Turkish police have tortured and otherwise ill-treated individuals in their custody after emergency decrees removed crucial safeguards in the wake of a failed coup attempt in July, 2016, Human Rights Watch said in a report released today.

The 43-page report, “A Blank Check: Turkey’s Post-Coup Suspension of Safeguards Against Torture,” documents how the weakening of safeguards through decrees adopted under the state of emergency has negatively affected police detention conditions and the rights of detainees. It details 13 cases of alleged abuse, including stress positions, sleep deprivation, severe beatings, sexual abuse, and rape threats, since the coup attempt.

“By removing safeguards against torture, the Turkish government effectively wrote a blank check to law enforcement agencies to torture and mistreat detainees as they like,” said Hugh Williamson, Europe and Central Asia director at Human Rights Watch. “The cases we have documented seem to indicate that some have done just that. Turkey’s government should reinstate these crucial safeguards now.”

A provision in the emergency decrees absolves government officials of any responsibility for actions taken in the context of the decrees. And the authorities’ decision to postpone a visit to Turkey by the United Nations special rapporteur on torture casts serious doubt on the authorities’ commitment to prevent torture and ill-treatment.

At least 241 police officers and citizens died and up to 2,000 were injured when elements of the military attempted a coup d’état against the elected government on July 15-16. Human Rights Watch interviewed several people injured while resisting the coup.

Shortly after the failed coup, the Turkish government declared a state of emergency, a step it is entitled to take in exceptional circumstances. The government also has the right – and even the obligation – to protect the public, investigate crimes committed during the attempted coup, including murder and bodily harm, and to hold those responsible to account.

However, a state of emergency does not give the government carte blanche to suspend rights, Human Rights Watch said. The prohibition of torture in international law is absolute and cannot be suspended even in times of war or national emergency. Yet the emergency decrees remove crucial safeguards that protect detainees from ill-treatment and torture.

The emergency decrees extend the maximum length of police detention without judicial review from four to 30 days, deny detainees access to lawyers for up to five days, and restrict detainees’ choice of lawyer and their right to confidential conversations with their lawyers.

In several cases Human Rights Watch documented, law enforcement officials and agents violated these rights to an extent exceeding even the permissive leeway granted under the emergency decrees.

“The police chief who detained me … began to slap me in the face and eyes,” one person who was detained said in a statement to a prosecutor. “They beat me on the soles of my feet, on my stomach, then squeezed my testicles, saying things like they’d castrate me.” He went on to describe a series of beatings on other parts of his body.

Police behavior and pressure from the authorities have also undermined the integrity of medical examinations for those in police custody and detention by often requiring that medical examinations take place in detention facilities and in the presence of police officers, Human Rights Watch research shows. In addition, the authorities have repeatedly denied detainees and their lawyers access to detainees’ medical reports that could substantiate allegations of ill-treatment during arrest or detention, citing secrecy of the investigation.

Law enforcement officers have applied these provisions not only to those accused of involvement with the coup attempt, but also to detainees accused of links with armed Kurdish and leftist groups, also depriving them of important safeguards against ill-treatment and unfair prosecution.

All of this has taken place in a pervasive climate of fear in which lawyers, detainees, human rights activists, medical personnel, and forensic specialists told Human Rights Watch they worried that they would be next in the government’s extensive purge of alleged coup supporters. These fears are not unfounded. For example, the authorities have placed more than 200 lawyers in pretrial detention on suspicion of involvement in the coup attempt, according to the Union of Turkish Bar Associations.

Lawyers, medical personnel, recently released detainees, and family members of detainees described to Human Rights Watch 13 cases of torture and ill-treatment after the coup attempt, with varying degrees of severity. The cases include allegations of methods ranging from stress positions and sleep deprivation to severe beating, sexual abuse, and rape threats. In one incident, the allegations concerned multiple detainees. Human Rights Watch withheld most names of detainees and lawyers for their own safety because they had serious concerns about possible repercussions.

Turkish government officials, including President Recep Tayyip Erdoğan, declared after the coup attempt that they had zero tolerance for torture. However, the authorities have failed to respond appropriately to recent torture allegations, instead often calling those making the allegations biased and accusing them of being coup supporters or of making propaganda for the Gülen movement, headed by a former government ally who is in self-exile in the United States, which the government accuses of responsibility for the coup.

Mehmet Metiner, the ruling party member of parliament who is head of the parliamentary sub-committee on prisons, recently stated that the commission would not investigate allegations of torture of alleged Gülen supporters in prisons. Widespread and systematic torture has been a longstanding problem in Turkey. But reports of torture and ill-treatment in police custody decreased significantly from 2002 to mid-2015, in part because of efforts to improve safeguards including limited custody periods, tighter procedures for recording detention and taking detainees’ statements, access to legal counsel early during police detention, and obligatory and regular medical examinations of detainees.

“Torture is like a contagious disease – once it starts it will spread; it is painful to see the reversal taking place now,” a lawyer detained following the coup attempt along with people he believed had been tortured told Human Rights Watch.

“It would be tragic if two hastily passed emergency decrees end up undermining the progress Turkey made to combat torture,” Williamson said. “The authorities should immediately rescind the most damaging provisions and investigate compelling allegations of torture and ill-treatment in police custody and any other place of detention.”

Once considered a beacon of hope for the Middle East, Turkey has been rapidly backsliding on issues of democracy, freedom of the press, and human rights. One would have thought this downfall hit bottom on July 15, when a bloody coup was attempted, leaving behind more than 250 dead.