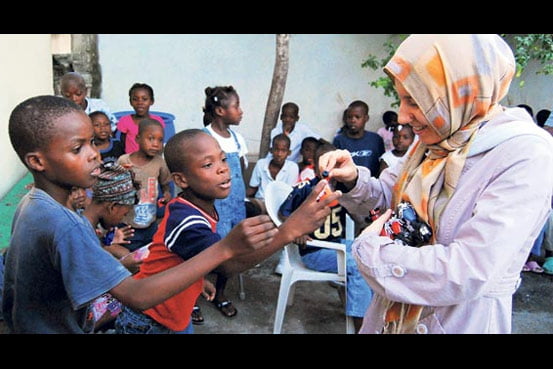 Administrators from Kimse Yok Mu, a Turkish aid organization, along with a group of Turkish businessmen paid a visit to an orphanage in Haiti and presented gifts to around 100 orphans.

The visit by the Kimse Yok Mu to the Centre d’encadrement d’enfants (Help for the Children) in the city of Croix-des-Bouquets was realized on the occasion of the Muslim Eid al-Adha holiday, which was observed last week.

Murat Tosun, a Kimse Yok Mu official posted in Haiti, said the Turkish businessmen travelled from the United States to Haiti to visit the orphans who lost their parents in an earthquake that hit the country in January, claiming the lives of more than 200,000 people.

Tosun said sacrificial animals that were donated by Turks were slaughtered in Haiti for three days during the Eid al-Adha festival and their meat was distributed to the poor.

“Now we are sharing the joy of the Eid with the orphans. By giving them presents and toys, we wanted to make them happy. It will be a big source of happiness for us if we can make these children feel a little bit of the joy of Eid,” Tosun said.

He also thanked Turks for their donations to Haiti and said he expects these donations to continue. “Do your best for these children,” Tosun said.

An official from the orphanage, Majorine D. Petion, said Kimse Yok Mu is the only organization that brings aid to Croix-des-Bouquets. “We offer our thanks to Kimse Yok Mu for the gifts and meat it brought for the orphans,” she said, adding that the children were very happy to receive the organization’s presents.

Kimse Yok Mu does not slow down in providing aid to the refugees who have settled in the city of Kilis, Turkey because of the civil war in Syria. Kimse Yok Mu distributes meals, including lunch and dinner to 1000 people, and has provided aid to 14,000 refugees living in the camps in the cities […]