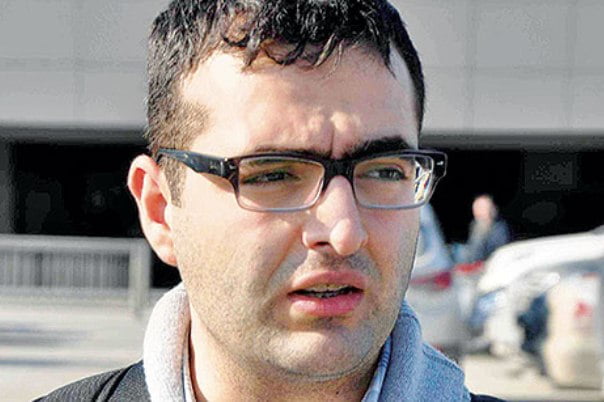 Turkey deported an Azerbaijani journalist on Friday for “posting tweets against high-level state officials,” according to an Interior Ministry order obtained by his newspaper, the English-language daily Today’s Zaman.

The journalist, Mahir Zeynalov, was “put on a list of foreign individuals who are barred from entering Turkey,” the newspaper reported, one month after Prime Minister Recep Tayyip Erdogan filed a criminal complaint against him for tweeting links to articles about a corruption scandal involving Mr. Erdogan’s government. According to the complaint, Mr. Zeynalov “committed a crime by exceeding the limit of criticism.”

As his followers on Twitter observed the drama in real time, Mr. Zeynalov and his wife, the Turkish national Sevda Nur Arslan, appeared at Istanbul’s Ataturk Airport early on Friday and surrendered to immigration officials. The couple had decided to leave the country on their own terms before the police showed up at their home.

Because he did not comply with a deportation procedure that required the police to escort him to the airport, Mr. Zeynalov had to pay a fine before being permitted to board his flight, accompanied by an officer.

The Interior Ministry document, which Today’s Zaman posted online, said that because of Mr. Zeynalov’s Twitter comments, his “residence in Turkey is considered detrimental to public security and political and administrative requirements.”

Corruption claims shook the Turkish government last year after the publication of leaked evidence, including reports of shoe boxes filled with millions of dollars in cash and recordings said to reveal government officials’ discussing illegal financial deals with businessmen.

The government in turn accused the prosecutors who ordered investigations of being part of a prominent religious group known as the Gulen movement, for its leader, the United States-based cleric Fethullah Gulen. The Turkish authorities claim that the movement is trying to overthrow the government from within and that it has purged thousands of police officers and dozens of prosecutors. Today’s Zaman is affiliated with the Gulen movement.

Writing for the paper’s website from Azerbaijan on Saturday, Mr. Zeynalov explained:

The saga began when the government reportedly financed hundreds of what I would call “virtual militants” after anti-government protests took place in Gezi Park in Istanbul’s Taksim Square in an attempt to counter anti-government tweets. Mostly in their early 20s, the pro-government social media trolls started to incessantly attack those who express views critical of the policies pursued by the government. I also received my share of attacks, particularly when I called on Turks to reject the military coup in Egypt in principle rather than standing behind ousted President Mohammed Morsi.

The attacks continued for several months and culminated on Dec. 25, when I pushed the tweet button on two news reports published in our newspaper. One of the articles was on a Saudi businessman who is on the U.S. global list of terrorists. He was one of the 45 suspects to be detained on the order of prosecutors investigating corruption, but the police chiefs refused to comply. Pro-government media immediately launched a ruthless smear campaign against me and my newspaper for “attempting to portray the Turkish prime minister as protecting al-Qaeda militants.” “Turkey, beware of this traitor” and “Treacherous tweet from a TZ journalist” were some of the headlines of stories published in the pro-government media as part of the smear campaign.

Several days later, Prime Minister Recep Tayyip Erdogan filed a complaint against me for “inciting hatred and animosity among the public.”

After some government supporters claimed on Twitter that Mr. Zeynalov had been deported only because his residency permit had expired, Today’s Zaman responded that his papers were not due to expire for more than a month.

The editorial board of the paper pointed to what it called evidence of an online smear campaign against Mr. Zeynalov, which began after he drew attention to coverage of a corruption investigation that has ensnared the sons of two government ministers, as well as other government supporters.

In December, the Committee to Protect Journalists reported that Turkey had jailed more journalists than any other country, 40, in 2013.

The government moved against Mr. Zeynalov as Turkey’s Parliament passed a regulation that would tighten control of the Internet, allowing websites to be blocked without a court order and permitting what Reporters Without Borders called “the mass surveillance of Internet users.” The bill will become law in the next two weeks unless President Abdullah Gul vetoes it.

Turkish Internet regulations have already been criticized for their vague description of the type of content that can be banned, such as anything relating to “sexuality.” Critics say this language gives officials appointed to the Turkish Telecommunication Presidency, or T.I.B., too much latitude.

The telecommunications agency has already blocked more than 30,000 websites, according to independent groups monitoring Internet restrictions, although the government has not released official data on the number of banned sites.

Yenidonem.com, the website of Mehmet Baransu, a journalist who reported extensively on the graft investigation, was blocked on Dec. 19, just two days after the investigation began. Would-be readers in Turkey are shown a message that says, “Protection measure has been taken on this website,” referring to a local court ruling that information published on the site was interfering with the judicial investigation.

Then the agency shut down VagusTV, a news blog established by the veteran newspaper journalist Serdar Akinan, after the blog published four articles that violated a court order banning the reporting of tapped telephone conversations regarding Burak Erdogan, Mr. Erdogan’s son and a businessman. The blocking of the website had one upside for Mr. Akinan: Last Wednesday, after it had been inaccessible for 12 days, the number of visitors tripled.

The new legislation would empower the telecommunications agency to remove any content deemed to be an attack on personal privacy, with no need to obtain a court order, experts on Internet law said. “In 2007, restrictions were pretty much designed to protect minors,” said Yaman Akdeniz, a professor of law at Istanbul’s Bilgi University. “However, now, the new legislation is framed in such a way as to protect the government from content deemed harmful to its political interests.”

In 2007, Turkey banned YouTube for nearly three years, drawing international attention to the country’s Internet restrictions for the first time.

For Turkish journalists who have faced government repression, censorship, unemployment or jail time as a result of their work in traditional news media, the Internet has been a lifeline. Now, some feel their freedom is also being curbed in the virtual world. “We could not exist in the traditional media doing what we considered proper journalism, and saw the Internet as a brand-new start,” Mr. Akinan of VagusTV said.

Mr. Akinan added that if the public did not use coming elections to curb government power, he planned to change careers. “I’ll wait until results come out after the March 30 local elections and then decide whether my people will stand by democracy or a Middle Eastern-style state controlling everything, then move to a village for organic farming,” he said. “I’m not joking. I’ve made my plans.”