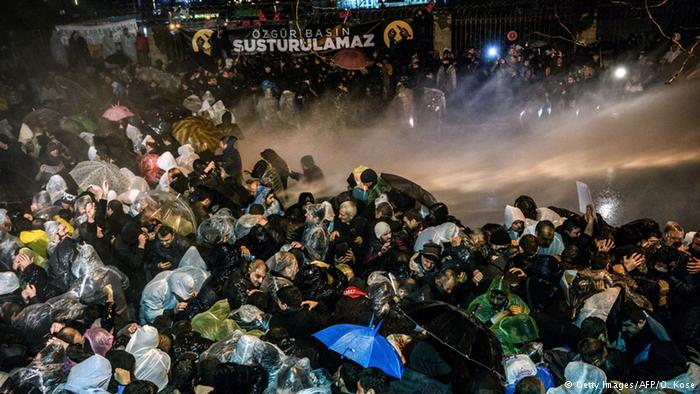 «My life changed in less than 3 hours. I was supposed to speak at a conference on terrorism, then I find myself accused of being liked to terrorists». Not to mention that now she lives abroad away form her family and she is risking to be arrested if she returns to Turkey.

The life of Sevgi Akarçeşme, former editor in chief of Today’s Zaman, an English-language sister publication of the group’s flagship Turkish-language daily Zaman, turned upside down on March 4th 2016. That day, a Turkish court ruled the newspaper Zaman should be run by appointed trustees. An official reason for the decision was not given. Unofficially, Zaman is paying a heavy price for being critical of the Turkish government and for the alleged link to the Cemaat movement, a group labelled by the Turkish government as a terrorist organization.

Speaking at a conference in Brussels “When will there be a EU-Turkey summit on press freedom ?” Sevgi Akarçeşmerecalled the sequence of events that marked one of the worse days of press freedom in Turkey: The occupation and of the Zaman building and newsroom by the police.

«It was around 11 pm. We were working to put out the next special edition of the paper before the new appointed administrators arrived, when the police raided the offices. Before entering the building, the officers fired tear gas at protesters who had gathered outside». 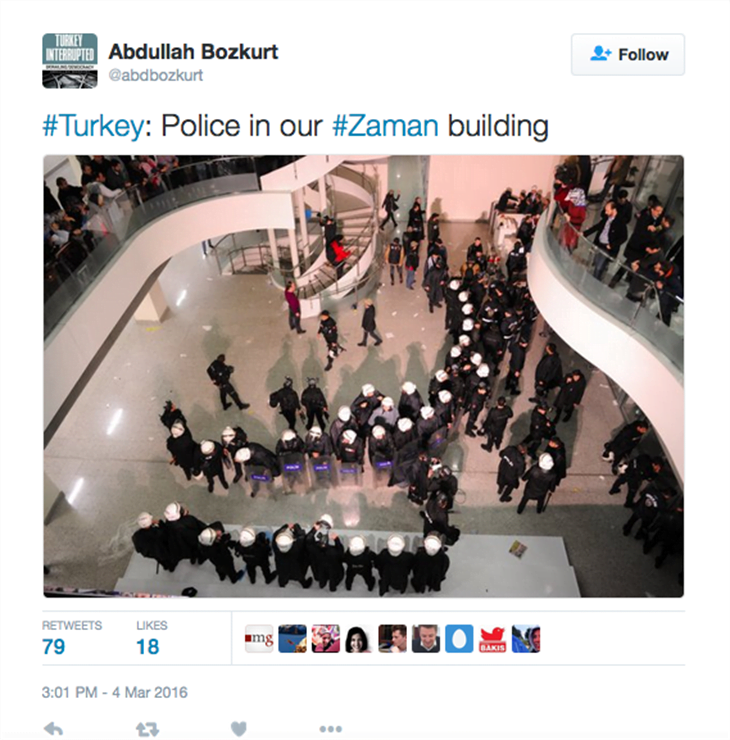 The former editor in chief, (but also formally still in charge since she did not resign nor she was fired-yet) was at the 4thfloor, the one occupied by the executives. «The police came right to this floor. They did not allow me to engage in any sort of communication. It was kind of brutal treatment. They tried to stop me from broadcasting the raid on Periscope. They eventually confiscated my cell phone. My editors colleagues« she added «were prevented from entering their offices. One of the police officers also said to sweep these people off this floor. This was one of the most striking comments of that night. The experience was dramatic. Now I feel a more relieved, but sometimes I still feel the impact of that drama. I am indeed concerned about my personal safety, therefore I am not going to go back to Turkey soon. The day I left my country, Sunday the 6th, I did was not stopped not questions at the airport, But it was tense. I felt like I was in the movie Argo, the scene at the passport check».

Dressed totally in black as she wanted to signalling the dark age Turkish press is facing and speaking with a confident but malinconic voice, she went on claiming that most of the Turkish people is not aware of the media crackdowncarried out by the government and its grip on the press. «The fate of Zaman is more known abroad then at home. Turkish people are almost in complete darkness in receiving reliable reporting and news stories. There is no single TV station that is offering independent news coverage. And it will get worse. Today Turkey is not a safe place for journalists. If you voice out criticism toward the government, you will pay a heavy price. What is happening to journalists today, it can happen to citizens tomorrow».

Sevgi Akarçeşme added also some comments on the current negotiations between the Eu and Ankara on the migrants agenda. «Personally » she said «I find extremely disappointing that the Eu has turned a blind eye on Endogan fearing an increase of refugees. »I don’t think the Eu will live up to its values. I will not take any European political seriously when they talk about values and principles».