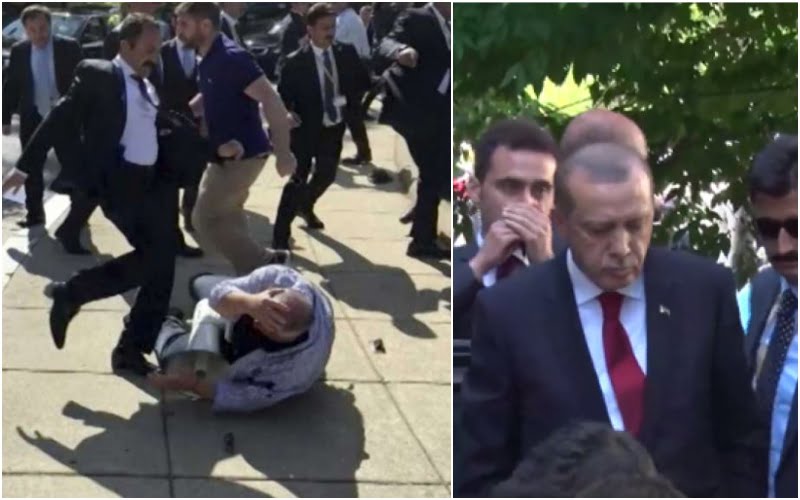 It’s an old story with dictators. If unopposed, they become ever more brazen in their aggression. Case in point: Turkey’s Recep Tayyip Erdoğan.

On May 16, during a state visit to Washington, Erdoğan’s bodyguards beat up peaceful protesters, many of them American citizens, in front of the Turkish embassy. At least 11 protesters were injured. Two arrests were made—both of the demonstrators. Erdoğan’s security force, assisted by freelance Turkish goons, got away with their assault in the heart of Washington.

By examining videotape of the incident, the New York Times was subsequently able to identify 24 attackers—most of them members of the presidential detail and hence presumably protected by diplomatic immunity. But even if so protected they could be designated “persona non grata” and denied future entry to the United States.

Eight of the attackers were simply Erdoğan supporters, including one man who lives in New Jersey and another in Virginia. A third is from Toronto. One of them even admitted to the Times that he had kicked a female demonstrator who was lying on the ground. As far as we know, though, none of the perpetrators have been prosecuted.

The U.S. needs to work with Turkey in the Middle East, but that doesn’t mean we should extend Erdoğan a blank check for repression. Trump’s slogan is “America First.” The president needs to apply it when a foreign dictator is victimizing American citizens.

The most that happened was that the Turkish ambassador in Washington was summoned for a dressing down at the State Department from Under Secretary of State Thomas Shannon, a career Foreign Service Officer. It is doubtful that the Turks took this talking-to very seriously since it was not echoed on President Trump’s Twitter feed, who has been effusive in his praise for Erdoğan.

Nevertheless, the Turkish Foreign Ministry had the temerity to lodge a formal protest with the U.S. ambassador in Ankara over “aggressive actions by American security personnel during a visit to Washington.” What really seemed to offend the Turks is that the Washington police “had failed to quell an ‘unpermitted’ and ‘provocative’ demonstration.” Having repressed freedom of speech at home, Erdoğan apparently is now intent on repressing it in Washington as well—and he’s not getting much pushback from the U.S. government.

So now we come to the sequel: Erdoğan is going after Enes Kanter, the Turkish basketball superstar who plays center for the NBA’s Oklahoma Thunder. Kanter is an outspoken supporter of the exiled Turkish cleric Fethullah Gulen, who Erdoğan blames (without any real evidence) for a failed military coup last summer. Last month, while on a global tour for his charitable foundation, Kanter had his Turkish passport revoked. He was in Rumania at the time and was briefly detained; he feared that Rumania was going to extradite him to Turkey, where Erdoğan would be able to jail him. Luckily, with help from the Department of Homeland Security, Kanter was able to make it home to the United States.

But his family remains in Turkey and is vulnerable to retaliation. The hoops star’s father, Mehmet Kanter, a genetics professor, went so far as to publicly denounce his own son: “I apologize to the Turkish people and the president for having such a son,” he wrote in a statement published across Turkish media. “His statements and behavior trouble our family.”

But that did not prevent the elder Kanter from losing his teaching position along with tens of thousands of others. And now it has not saved him from being arrested by the regime along with roughly 45,000 other political prisoners. On June 2, Enes Kanter tweeted: “HEY WORLD MY DAD HAS BEEN ARRESTED by Turkish government and the Hitler of our century. He is potentially to get tortured as thousand others.”

The treatment of Enes Kanter and his family is an outrage, even if does not rise to Nazi Germany, as his tweet suggested. But it’s bad enough that so many Turks have to suffer from this crackdown by their new sultan. The U.S. cannot stop Erdoğan, but it can register its disgust with what he is doing and highlight the need to respect basic human rights—especially on the part of a NATO ally. But that’s not what the Trump administration is doing. Trump even called Erdoğan in April to congratulate him on winning a rigged referendum that will further increase his already vast power.

The U.S. needs to work with Turkey in the Middle East, but that doesn’t mean we should extend Erdoğan a blank check for repression. Trump’s slogan is “America First.” The president needs to apply it when a foreign dictator is victimizing American citizens.