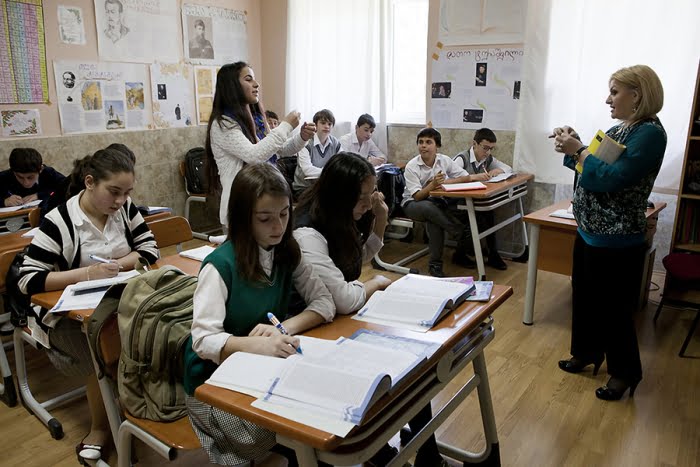 A teacher and a middle school student talk during a class lecture at the Gülen-affiliated Refaiddin Şahin Friendship School in Batumi, Georgia, in April 2013. Some Eurasian states, including Georgia, Kyrgyzstan and Kazakhstan, have so far resisted Turkey’s calls to close Gülen-affiliated schools. (Photo: Justin Vela)

As part of a wide-ranging clampdown in the aftermath of the failed July coup, Turkish President Recep Tayyip Erdoğan’s administration has urged countries in Eurasia to shut down schools associated with the Muslim cleric Fethullah Gülen. But outside of Azerbaijan, the call does not seem to be swaying Eurasian governments.

Erdoğan has publicly accused Gülen supporters of leading the thwarted coup. Accordingly, lots of Gülenists in Turkey have been arrested, and lots more fired from their state jobs. The Turkish government has also classified Gülen’s organization as a terror group.

Erdoğan’s animus toward the Gülen movement is such that Turkey has gone to great lengths to get friendly governments in Eurasia, specifically the Turkic-language states in Central Asia, to crack down on suspected Gülenists in their respective countries, as well as shut down Gülen-oriented schools. The Gülen organization made significant inroads into Eurasia in the years following the collapse of the Soviet Union.

Yet, only Azerbaijan, Turkey’s closest regional ally, has launched a full-fledged anti-Gülen campaign. One university in Azerbaijan has been placed under state control, and 50 teachers have been deported. In addition, Azerbaijani authorities have shut down a private TV station, and have alleged that some domestic opposition organizations have ties to the Gülen movement. At least one opposition activist has been arrested under such suspicions.

By contrast, Georgia, the pipeline link between Azerbaijan and Turkey, and Kyrgyzstan, a Turkic Central Asian nation, have so far resisted closing Gülenist schools. Strategic partner Kazakhstan – like Azerbaijan and Kyrgyzstan, a Turkic cousin – only promised to expel any Turkish Gülenist teachers. The governments of Uzbekistan and Turkmenistan, two of the most repressive in the world, have long barred Gülenists from operating in their respective countries.

Many of the schools in Eurasia have non-Turkish managers, teachers and financing. Thus, there is little that could publicly link these schools to the Gülen movement in Turkey, noted Bayram Balci, an Institut d’études politiques de Paris specialist on Islam and Central Asia.

Managers cannot be considered Gülenists in a strict sense because they do not necessarily advocate Gülen’s Islamic principles, Balci reasoned. Meanwhile, many junior staffers have only a vague awareness of the elderly cleric, who now resides in self-imposed exile in Pennsylvania. And many are unfamiliar with Gülen’s writings.

“Gülen schools in some countries are not Turkish anymore, and this specificity will help them to survive,” Balci added.

The situation in Georgia illustrates the challenge for Turkish diplomats. A few days after the July 15 coup attempt, a translation of a TV interview began circulating that featured Yasin Temizkan, Turkey’s consul in the Black Sea city of Batumi. In the interview, Temizkan urged the Georgian government to close the local Refaiddin Şahin Friendship School, a private institution considered part of the Gülen network. The justification, Temizkan said, was that the school was “serving terrorist groups.”

Other Turkish diplomats have made similar appeals worldwide. But in Batumi, angry school staff, teachers and parents demanded a public apology. Five other private Georgian schools, also believed to be Gülen-linked, supported them.

Citing a lack of evidence, Education Minister Aleksandr Jejelava downplayed the matter, but emphasized that Tbilisi does not want “anything to complicate” its “friendship” with Turkey.

That friendship is critical. Turkey ranks as one of Georgia’s largest trade and investment partners.

Turkish Ambassador to Georgia Zeki Levent Gümrükçü declined to discuss with EursaiaNet.org how Turkey might respond to Georgia’s refusal to close suspected Gülenist schools like Şahin, calling such a topic “very speculative.” He emphasized that the ultimate decision depends on the government itself.

“We have … very good relations with Georgia. We speak to each other. We share everything with each other and I think that’s the most you can expect out of a relationship,” the ambassador said.

He went on to note that the two sides discussed “everything” about the Gülenist movement – both abroad and in Turkey – during Georgian Prime Minister Giorgi Kvirikashvili’s July 19 trip to Ankara and meeting with President Erdoğan. The ambassador described the discussions as “an ongoing process.”

The Georgian prime minister’s office did not respond to a request for comment. Kvirikashvili was the first senior foreign official to visit Turkey after the attempted coup – a fact that reflects the two countries’ relationship, Gümrükçü underlined.

Balci suggested that Ankara’s lack of progress in advancing its anti-Gülenist agenda was due in part to a lack of diplomatic “levers against its partners to force them to close Gülen schools.”

Now, there are signs that Turkey may revise its diplomatic approach. Ambassador Gümrükçü earlier announced that the Turkish consul had not meant that Şahin’s students and graduates themselves were terrorists, and described the consul’s reported remark about presenting the government with evidence on that score as “blown out of its proportions.”

Giorgi Badridze, a former deputy head of mission for the Georgian Embassy in Ankara and a former Georgian ambassador to the United Kingdom, does not believe that differences over the perception of the schools will disrupt good bilateral relations.

“Georgia and Turkey have been close partners for the last 25 years,” Badridze said. “I think our countries will find ways to resolve this issue in the interests of both nations, and based on the rule of law.”