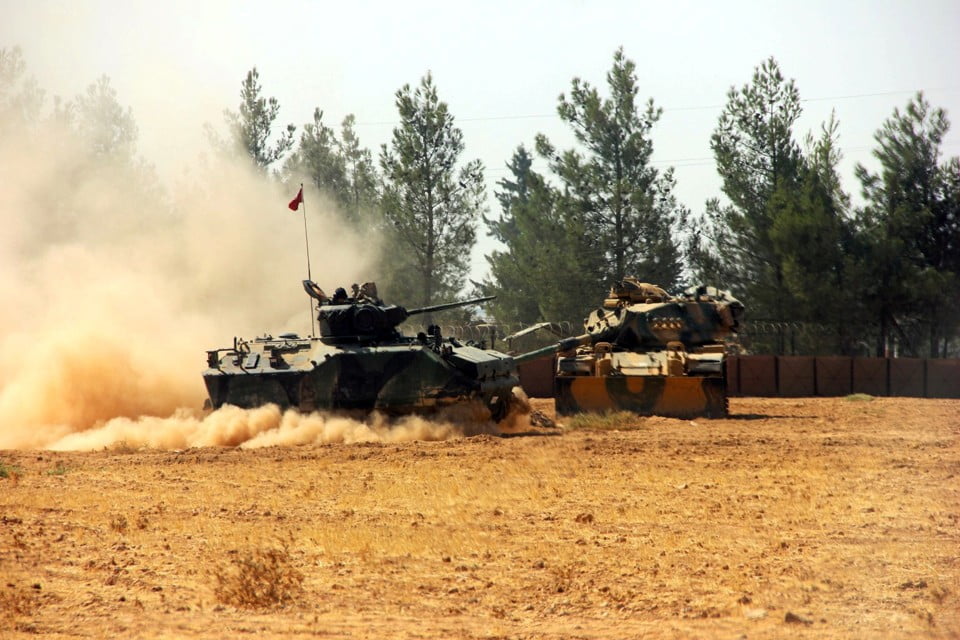 A Turkish army tank and an armoured vehicle are stationed near the Turkish-Syrian border in Karkamis in the southeastern Gaziantep province, Turkey, August 23, 2016. Picture taken August 23, 2016. Ihlas News Agency via REUTERS ATTENTION EDITORS - THIS PICTURE WAS PROVIDED BY A THIRD PARTY. FOR EDITORIAL USE ONLY. NO RESALES. NO ARCHIVE. TURKEY OUT. NO COMMERCIAL OR EDITORIAL SALES IN TURKEY. TPX IMAGES OF THE DAY - RTX2MSUX

Erdogan launched an intervention against ISIS in Syria, while gutting his own government’s ability to confront the problem at home.

The Turkish government has blamed the Islamic State for the attack, with an unnamed senior official saying that the device used was the same type of suicide vest employed in two previous bombings in Turkey attributed to ISIS—including the deadly attack on a gathering outside of the Ankara train station in October 2015, which killed 103 people. Following the Gaziantep attack, Turkish Foreign Minister Mevlut Cavusgolu vowed to cleanse ISIS from the country’s border with Syria, a threat the Turkish military followed through with on the morning of August 24, sending in tanks and special forces alongside Syrian-Arab rebels to take the ISIS-held town of Jarablus, with air support from the United States. Planning for that well-executed offensive seems to have been underway long before the Gaziantep attack (although the possibility of Turkey simply issuing an ultimatum to the United States cannot be ruled out)..

In a major setback for ISIS, Jarablus quickly fell. But ISIS may have actually made a tactical retreat—something that, in other parts of Syria, has been followed by asymmetric attacks against advancing forces. Turkey is vulnerable to these attacks inside Syria if it chooses to leave forces behind following the Jarablus operation. ISIS is also capable of continuing its attacks against targets inside Turkey itself.

But while Turkey’s government may blame ISIS for the recent attacks, it has long tolerated the group and the smuggling and recruiting infrastructure it operates within its borders. In repeated public statements, Ankara has also refused to distinguish between terror groups, lumping ISIS together with the Kurdistan Workers’ Party (PKK), the YPG—which Turkey views as the PKK’s Syrian branch—along with followers of Fethullah Gulen, the Pennsylvania-residing, exiled Islamic cleric that President Recep Tayyip Erdogan blames for plotting the failed coup of July 15. According to the Turkish government, all terror threats are one. Turkey’s pro-government media, meanwhile, has taken this one step further, suggesting that Gulen is using both the PKK and ISIS to destabilize Turkey, an assertion resting on the widely held belief in Turkey that the United States controls Gulen.

Erdogan’s ruling Justice and Development Party (AKP), for its part, has wielded this anti-Americanism to deflect questions about its ISIS policy. This strategy may be politically beneficial. But it prevents Erdogan’s government from understanding why the Gaziantep attack happened, and from coming to terms with the permissive climate ISIS operated in for years.

With its eye on Kurdish militancy and creeping Gulenism, the Turkish government did little to control the smuggling of materiel and recruits flooding across its border with Syria, before changing its approach in early 2015. ISIS in Turkey benefits from its proximity to the war-ravaged country: It eases the smuggling of explosives from Syria to Turkey, as well as the group’s ability to purchase goods—like ball bearings—useful for the suicide vests being used to kill citizens in their home country.

Neither the Gaziantep attack nor its target were random—facts that should have been well known to Turkish police. Yunus Durmaz, the man previously believed to be in charge of logistics for the Turkey-based ISIS cell, had identified weddings as a potential target in an electronic file and in emails Turkish police confiscated from his belongings after he blew himself up in a police raid on his apartment in Gaziantep. For years, this ISIS cell has been responsible for smuggling contraband into Syria. The group’s reported former emir, Ilham Bali, used a series of underlings to ferry men and supplies across the border. He placed special emphasis on the procurement and transfer of ammonium-nitrate-rich fertilizer, the primary component in the vehicle-born improvised explosive devices (VBIED) ISIS uses to such devastating effect.

Surprisingly, since 2012, Turkish police had been following Durmaz, Bali, and at least 17 others linked to the ISIS cell behind most of the attacks in Turkey. Durmaz eventually set up shop in Gaziantep, managing a handful of warehouses to store supplies before they were shipped into Syria, and a workshop for the manufacture of VBIED and suicide vests—one of which he wore most of the time, right up until he killed himself in a May 2016 police raid.

In the wake of the failed coup, Turkey has handicapped the institutions best-positioned to root out ISIS.

Despite its intelligence on the Durmaz group, though, the Turkish government failed to crack down on these men and many others until early 2015, choosing instead to passively investigate them for links to global jihadism. In July 2015, Seyh Abdurrahman Alagoz, a 20-year-old man who had previously traveled to Syria with his brother, returned to Turkey to explode a suicide vest—made in Gaziantep—at a gathering of leftists waiting to cross the border to give aid to Kobane, the Kurdish-majority town that resisted an ISIS assault. Thirty-three died. In October 2015, Seyh’s brother and an unidentified, non-Turkish national, carried out the attack on Ankara’s main train station, using a similar device. Now, a third individual, wearing a suicide vest like the others, has carried out another attack in Gaziantep.

The Turkish government has increased border security, and reported crossings to Syria have dropped considerably since early 2015. But the ISIS threat persists. The group responsible for many of the recent attacks has suffered some losses, but many of its core leaders are alive, and reportedly in Syria.

In the wake of the failed coup, Turkey has also effectively handicapped the institutions best-positioned to root out ISIS. Turkish security forces face the impossible task of disrupting and defeating three different sub-state groups: the PKK, ISIS, and suspected followers of Gulen. But the purge of thousands of police officers and members of the judiciary for their alleged links to Gulen have decimated Turkey’s police intelligence organization: 6,500 out of 7,000 personnel have been purged from this body, the law-enforcement institution that would normally be expected to play a role in the ongoing investigation into the latest ISIS attack in Gaziantep. This multitude of factors points to longer-term security challenges for the Turkish government and, by extension, some of the potential political vulnerabilities the AKP now faces.

ISIS remains active in Turkey, and its Turkish members remain committed to carrying out attacks. The infrastructure for future attacks starts in Syria, but also draws on resources from inside Turkey, which places a severe burden on law enforcement to disrupt these networks at a time of major bureaucratic upheaval. The Turkish military has made impressive gains in Jarablus in a short period of time, but the next phase of the battle lies on the other side of the border.