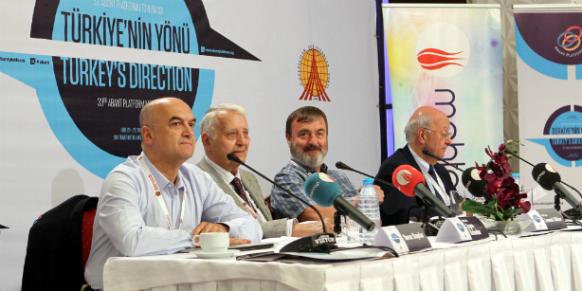 The Abant Platform, in Saturday’s first session, has discussed the “Development, Respectful Environment and Democracy,” voicing that a sustainable economic development is not possible under the current growth model as the Soma mine disaster, occurred on May 13, proved and the “Separation of Powers and the System Discussions,” during the second session.Participants agreed that the current development model cannot be sustained as Turkey’s sources are limited despite the unlimited economic growth is targeted. The second part drew attention that the separation of powers has been systematically contravened by the government through recent laws eradicating the judiciary’s power and subordinating it to the Justice Ministry.

Ahmet Atıl Aşıcı, an academic and member of the Greens and the Left Party of the Future (YSGP) said that the Soma mine tragedy indicated that the decade economic growth policy had heavy cost on society as well ecology.

Emphasizing that the Soma mine disaster, in which 301 miners lost their lives, was a result of the unreasonable insistence on unsustainable economic development based on exposing labor and the environment, Aşıcı said to audience, “That is why the government refuses to ratify the International Labor Organization’s (ILO) Convention 176 on safety and health in mines. It changed the Construction Zoning Law for 160 times in ten years. According the government’s mind, all laws on related to these fields should be bend for seizing the rights of labor and this is what the political authority is doing now.”

Reminding audience that Prime Minister Recep Tayyip Erdoğan announced “Turkey’s 2023 Vision” aiming to make Turkey among the top economies of the world, Aşıcı stressed that the vision is not reasonable since the goal requires much more energy consumption and also generating that exceeding Turkey’s capacity in both.

“Turkey relies heavily on outside energy sources to meet its demand in industry. Thus, there is need for promotion of local energy sources like lignite coal and coal. That is why they enacted a promotion law on the matter,” Aşıcı added.

Ali Yurttagül, a political adviser for the Greens in the European Parliament (EP), said that since 1990 the main opposition Republican Peoples’ Party (CHP) lost its power for being remedy to the problems of the certain segments of societies who struggle for poverty and lack fundamental rights, adding, “That is why the current government is so powerful.”

Reminding audience that Germany abandoned the policy to construct additional nuclear power plants and to eliminate the ones which were earlier built, Yurttagül added, “It means giving up an investment worth to TL 150 billion. This decision is hugely important for indicating that how the environmental consciousness has reached a great point in Europe.”

“At this point, the importance of the European Union (EU) principles becomes clearer to us. If the government had achieved to open the 19th chapter, concerning the environment, the work safety inside the social politics, most probably, we would not have the Soma disaster,” Yurttagül said.

In its second session on Saturday, the platform has handled the issue of “Separation of Powers and the System Discussions.”

Ersin Kalaycıoğlu, a professor of political science, said that the separation of powers in Turkey has been systematically contravened by the government and criticized the government-led legislations aiming to enhance the executive branch against the judiciary.

Stressing that the separation of powers principles is no longer being respected in Turkey, Kalaycıoğlu said, “The system that we have now cannot be called democracy. Erdoğan is an elected sultan (emperor). This regime might be defined as authoritarian or despotic regime. If he is elected as president in August’s 10 presidential election, then he will try to act as a de facto president [American type]. This is the problem of all of us.”

Kalaycıoğlu also added that the current election law is not pluralistic and does not represent the whole society.

Today’s Zaman editor-in-chief Bülent Keneş added that Erdoğan inactivated the inspection mechanism conducted by the state institutions like the Court of Account.

Sending a message to the Platform,  Journalists and Writers Foundation (GYV) Vice President Cemal Uşak said that despite the Constitution Court (AYM) tries to act as an inspection mechanism through its recent decision, lifting bans on YouTube and Twitter and nullifying certain laws on judiciary, it is not enough.