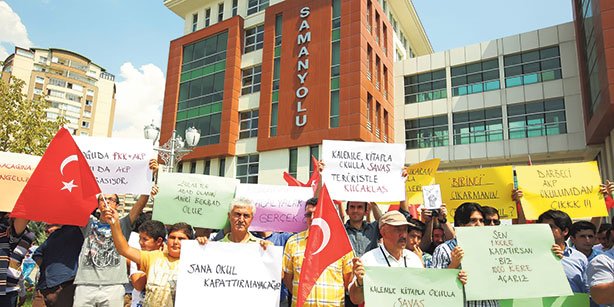 More than a hundred police officers, including counterterrorism units, conducted raids on a number of schools within the Samanyolu and Atlantik educational institutions early on Monday.

A police chief refused to give a copy of the police report of items seized to authorities of the private Nurettin Topçu Primary School, claiming that he was following the instructions of Ankara public prosecutor Serdar Coşkun, who ordered the operation targeting Gülen-inspired schools.

The police chief, who refused to state his name, alleged that prosecutor Coşkun ordered them not to give the copy of the police report to lawyers representing the school and to tell them that a confidentiality order was imposed regarding the search.

After attempting to obtain a record of the raid from local authorities, lawyers representing the school contacted an attorney from the Ankara Bar Association Lawyers’ Rights Monitoring Center and documented the unlawful incident.

Yavuz Porikli, a lawyer representing Nurettin Topçu Primary School, spoke to the press on Tuesday and said: “According to Article 121 of the Code on Criminal Procedure [CMK] a copy of the police report must be handed over to us [lawyers of the institution that was searched]. In the event that a confidentiality order is imposed, that must also be presented to us. We as lawyers have the legal right to [sign and receive a copy of] the police report. [Police officers] withheld the [document] from us,” Porikli said.

An increasing number of schools inspired by the Gülen movement have been targeted by the Justice and Development Party (AK Party) following a major investigation of alleged graft that implicated then-Prime Minister Recep Tayyip Erdoğan and other top AK Party figures, which was made public on Dec. 17, 2013. At that time, Erdoğan accused members of the Gülen movement of instigating the operation in order to overthrow his government.

In May 2014, Erdoğan publicly advised AK Party supporters not to send their children to schools inspired by the movement, vowing, “We will not even give water to them [the movement’s sympathizers].” He has also said he would carry out a “witch hunt” against anyone with links to the movement. Erdoğan has also ordered officials in AK Party-run municipalities to seize land and buildings belonging to those inspired by the Gülen movement by any means necessary. The movement strongly rejects the allegations and no charges have ever been filed against Gülen schools.