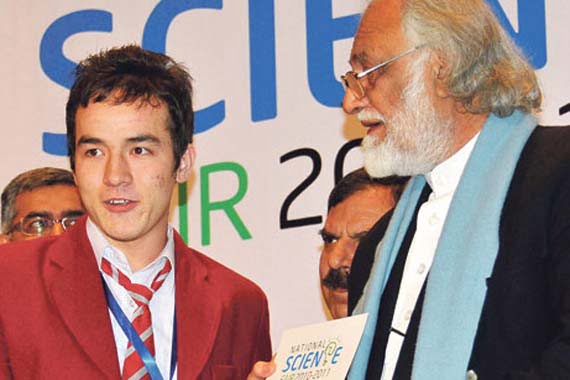 A Pakistani-Turkish school student will represent Pakistan in an international science Olympiad in the US, the Anatolia news agency reported yesterday.

Habibullah Hal Muhammad from Lahore’s Pak-Turk International School and College was named Intel grand winner in a project competition held on Tuesday as part of the Intel National Science Fair. His project, “Organic Battery,” will represent Pakistan at the International Science and Engineering Fair 2011 in Los Angeles, California.

A total of 120 students from across the nation competed in the event, held by Intel and the Pakistani Ministry of Education. Pakistan Federal Education Minister Sardar Aseff Ahmed Ali was in attendance at the finals. Among 120 projects, 15 were presented with the Best of Intel award. Tenth grade student Muhammad received the Intel Grand Winner award for chemistry.

Speaking at the final ceremony, Minister Ali said the seventh edition of the competition aimed to encourage students from ninth to 12th grade to find solutions to the myriad of problems that the world faces. Congratulating the award-winning students, Ali presented the medals to the 15 winners. The successful students were also given monetary prizes by the Islamabad Chamber of Trade.

The students will take part in the international fair in the US along with more than 1,500 students from around the globe. The participants in the US event will compete to win prizes that are worth $3 million in total.