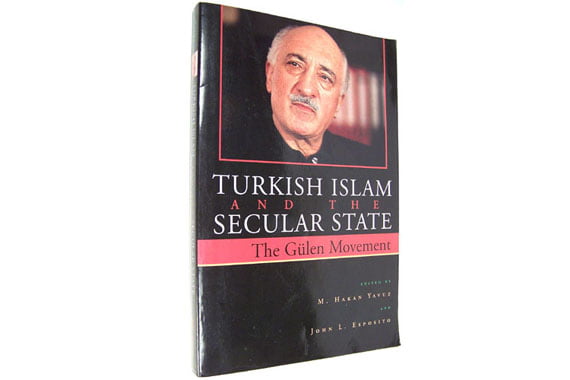 Teachings of Fethullah Gülen which have inspired hundreds and thousands of Turkish people work for global education, peace, and the spread of tolerance, has become the subject of a new scholarly book in the U.S.

The book entitled, ‘Turkish Islam and the Secular State: The Gülen Movement,’ was published by one of the distinguished publishing houses in the America, Syracuse University Press. Editors are renowned American expert on Islam, Dr. John L. Esposito, and Dr. M. Hakan Yavuz from University of Utah.

Foreign and domestic academics who contributed to the book by their articles include:

Academic papers presented at an international conference on ‘Islamic Modernities: Fethullah Gülen and Contemporary Islam’, held at prestigious Georgetown University and partly sponsored by the Rumi Forum for Interfaith Dialogue in Washington D.C. in 2001, have been developed and incorporated into the book.

In their introduction, Esposito and Yavuz assert that whereas the Turkish state has an understanding of secularism that is based on the ‘otherness’ of religion in general and of Islam, this study on Gülen movement ‘indicates the social and political conditions under which faith can become a source of capital to empower society’.

In his article entitled, ‘The Gülen Movement: The Turkish Puritans’, Yavuz describes Gülen as a ‘social innovator’ and reveals the 40-year evolution story of this civil society movement which is unique not only within Turkey, but perhaps all over the Muslim world. To Yavuz, ‘A stable Turkey presupposes a balance between Islamic values and the Kemalist political system; the Gülen movement offers a way to achieve this balance’. Yavuz, on the other hand, does not consider movement ‘democratic’ and ‘liberal’ enough.

According to Bekim Agai, Gülen, inspired by ‘educational philosophy’ of Said Nursi, ‘aspires to use modern education to stop what he sees a process of decline in the Muslim world’. Agai draws attention to the movement’s search for a place for Muslims in a globalizing world, and contends, ‘They are not anti-modern; they want to be a part of modernity, but they also want to contribute their religious and ethical ideals to it’. He point outs to ‘the inability of secular circles in Turkey to comprehend how a religious movement can participate in modern education and still remain Islamic’.

In his article titled, ‘Fethullah Gülen as Educator,’ Dr. Thomas Michel, based upon his personal visits and observations, analyzes how Turkish schools opened abroad with Gülen’s incentives could bring together different ethnic and religious groups even in some of the most troubled regions of the world. “I find these schools to be among the most dynamic and worthwhile educational enterprises I have ever encountered all over the world,” Michel asserts. Having interviewed three female teachers working at schools affiliated with the movement in two major cities in Turkey, Elisabeth Ozdalga tries to understand the role of women in the movement and how they perceive Gülen’s messages. Ozdalga’s interviews reveal characteristics such as; love (encompassing the whole of humanity), pietism, humility, self-criticism, professional (not political) activism and sacrifice. One of the judgments she makes is, “Becoming part of the Gülen community does not mean that individuals are turned into passive tools in the hands of an authoritarian leadership.”

Ahmet Kuru’s thesis is that Gülen tries to find a ‘middle way’ between ‘modernity’ and ‘Muslim tradition’. According to Kuru, Gülen neither tries to create an ‘eclectic’ or ‘hybrid’ synthesis, nor accommodates to the hegemony of modernity by changing Islamic principles. What he does is ‘to reveal a dynamic interpretation of Islam that is both compatible with and critical of modernity and Islamic tradition.’

Yasin Aktay, examines two historical elements which he believes can be considered constitutive in Gülen’s body of knowledge; diaspora and stability. Aktay tracks the evidence of the ‘diaspora psychology’ in Gülen, which he thinks is characterized in ‘Turkish Islamism’ by Necip Fazil Kisakurek’s line of poetry, ‘You are a stranger in your own home; a pariah in your own country’. He sees Gülen’s pursuit of ‘stability’ as a ‘characteristic element of traditional sunni Islamic ulema (scholars)’.

Dr. Zeki Saritoprak, calling Gülen ‘one of the most influential and impressive Muslim Turkish scholars of the last decades of the twentieth century’, notes that even though they are not structured like a ‘tariqah’ (Sufi religious sect), Gülen and people around him have many traces of the ‘Sufi tradition’ and thus Gülen could be called a ‘Sufi in his own way’.

Ihsan Yilmaz writes that the Gülen movement, not necessarily saying so but ‘by conduct’, provides a successful example of a ‘neo-ijtihad’ (re-interpretation) and ‘Tajdid’ (renewal). ‘Gülen has reinterpreted Islamic understanding in tune with contemporary times and has developed and put into practice a new Muslim discourse with respect to some traditionally sensitive issues’ Yilmaz maintains. According to Yilmaz, ‘Gülen not only is renewing Muslim discourses and practices, but also transforming the public sphere, without claiming and boasting that he is doing so’ with the potential to influence not only Turkey but the whole Muslim world.

John O. Voll portrays Gülen as ‘one of the major figures in defining the contemporary global Islamic experience’ in his article entitled ‘Fethullah Gülen: Transcending Modernity in the New Islamic Discourse.’. While he talks about ‘clashing visions of globalizations’, Voll sees Fethullah Gülen as ‘a force in the development of the Islamic discourse of globalized multicultural pluralism’. To Voll, ‘As the impact of the educational activities of those influence by him attests, his vision bridges modern and postmodern, global and local, and has a significant influence in the contemporary debates that shape the visions of the future of Muslims and non-Muslims alike’.