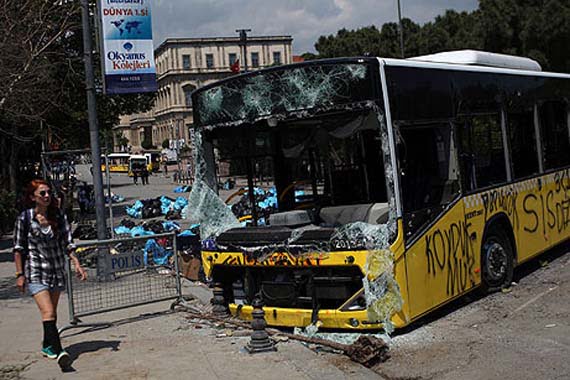 Turkey’s leading social debate platform Abant has called on both government and protesters to exercise common sense, urging restraint for both sides to avoid violence in nationwide protests that gripped Turkey for more than a week.

The Abant Platform expressed its concerns over possible chaos that could follow sometimes mutually violent actions of both sides during protests, which it said had started with environmental concerns.

The statement, drafted by members of the Abant Platform Executive Board, said the excessive use of force by police against protesters has become the main cause of the violent spread of protests. The Abant said immediately ending these events that threaten fundamental rights and freedoms, national peace, democratic stability and security of people is the “ethical and humanitarian responsibility” of political parties, civil society organizations, public figures, particularly the government and protesters.

The Abant Platform regularly convenes to discuss some of the most vital issues for Turkey and the world with the participation of individuals from every segment of society and prominent intellectuals.

The platform invited the government to rule the country with prudence and be the “government of 76 million people,” referring to the all citizens of Turkey. The Abant also called on protesters to limit their actions with only peaceful protests.

“In democracies, the ballot box doesn’t mean everything. But we should not forget that those who came with elections should leave with elections,” the statement said.

The platform stated that some of government’s recently adopted regulations are perceived as interference into people’s lifestyles and that this has caused some disturbances among society. Similarly, the statement added, some decisions the government endorsed recently overlook sensitivities of various religious minorities. They urged to revise these decisions that will be in the benefit of the country.

The statement said the real prosperity of Turkey is its plurality that is based on respect to differences.

“Every individual deserves respect with their own preferences and faith. Taking these preferences into consideration by all political institutions, particularly the government, is the guarentee of national peace,” the statement said.

Call for commensense from Turkish Association of Volunteer Agencies

Turkish Association of Volunteer Agencies (TGTV) which includes various foundations and associations under its umbrella called for commonsense in a press statement on Wednesday. The President of TGTV said that what started as a civilian movement to protect the trees ended up in unpleasant events as a result of the provocation of ill intentioned people.

Attracting attention to the fact that many policemen were injured, public buildings and vehicles were damaged as well as private citizens and property, Akbulut said that “an environment of chaos and insecurity was intended in order to prevent Turkey from further development.”

“We see the efforts to reflect what is happening in Turkey as Turkish Spring abroad as a deliberate distortion and misleading” Akbulut further stated. According to him, the way the events in Turkey are portrayed in the foreign media shows that certain forces are disturbed by the peace environment attained in the country.