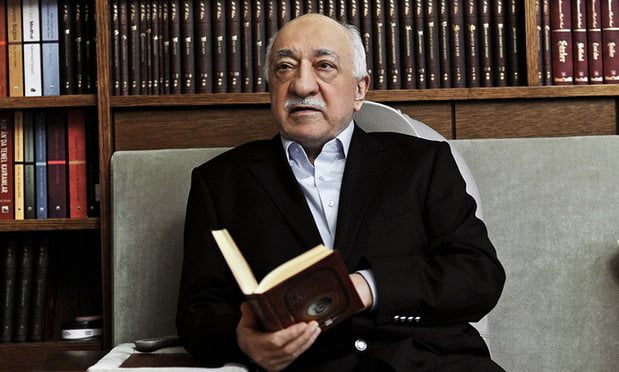 In a picture taken in March 2014, Fethullah Gülen sits at his residence in Saylorsburg, Pennsylvania. Photograph: Selahattin Sevi/AP

In a rare and brief interview on Saturday with a small group of journalists at his residence in Saylorsburg, Pennsylvania, Gülen rejected all accusations that he was behind the coup attempt.

“I don’t believe that the world believes the accusations made by President Erdoğan,” Gülen said. “There is a possibility that it could be a staged coup and it could be meant for further accusations [against the Gülenists].”

Gülen, who leads from exile a popular movement called Hizmet and split from Erdoğan over a corruption scandal in 2013, spoke in a small prayer room, lined with woven rugs and decorated with Islamic calligraphy and leather-bound religious books. Reporters were served Turkish tea and sweet dry figs at his Pennsylvania compound, which he moved into after arriving in the US in 1999.

He said he rejected all military interventions, and said he had personally suffered after the coups of the 1990s.

“After military coups in Turkey,” he said, “I have been pressured and I have been imprisoned. I have been tried and faced various forms of harassment.”

He added: “Now that Turkey is on the path to democracy, it cannot turn back.”

Asked by the Guardian whether he would have returned to Turkey had the coup been successful, Gülen said: “Indeed, I miss my homeland a lot. But there is another important factor, which is freedom. I am here, away from the political troubles in Turkey and I live with my freedom.”

Speaking in public in Istanbul on Saturday, Erdoğan called on Barack Obama to arrest Gülen and deport him to Turkey. Turkey had never turned back any extradition request for “terrorists” by its US ally, Erdoğan said, adding: “I say if we are strategic partners then you should bring about our request.”

No official extradition request had been made, according to the US secretary of state, John Kerry, who spoke to reporters in Luxembourg. “We fully anticipate that there will be questions raised about Mr Gülen,” he said.

“And obviously we would invite the government of Turkey, as we always do, to present us with any legitimate evidence that withstands scrutiny. And the United States will accept that and look at it and make judgments about it appropriately.”

The last time the reclusive leader spoke live to international press was in 2014. He rarely leaves the Golden Generation Worship and Retreat Center complex, where his movement offers religious instruction, and he is in fragile health. Before the interview on Saturday he was attended to by a stethoscope-carrying physician, who measured his blood pressure.

The sprawling compound, nestled in Pennsylvania’s Poconos region, does not seem like the lair of a conspirator. Gülen lives in a small room in a two-storey brick prayer hall, where visitors come for worship and instruction. A panoramic photograph of Istanbul covers the length of one wall.

Down a corridor lies a small bedrooom, shown to reporters, that suggests a spartan life: a single futon is flanked by small shelves displaying framed Arabic calligraphy, an alarm clock and prayer beads. Over a small wooden desk is a shelf that holds books with titles like Imploring Heart and Renewing Islam By Service, as well as a collection of bottled perfumes.

Opposite the bedroom, a small “fitness” room features a treadmill and a reclinable medical bed with a monitor attached.

Outside, past a guardhouse that is manned around the clock, a winding asphalt road passes landscaped gardens and large residential homes. Signs in English and Turkish advise where cars must not park.

Alp Aslandogan, media adviser to Gülen and executive director of Alliance for Shared Values, the US arm of the Hizmet movement, said security was on “high alert” following threats of violence on social media.

Near the compound, a small protest had gathered, with a dozen Turkish Americans waving large Turkish flags.

“You are with him; we don’t want to speak to you,” said one man, who did not want to be named, adding: “This is a second Bin Laden in the making and America is protecting him.”

A woman was waving a flag with Erdoğan’s picture on it. She said: “Senators are getting money from him.”

Before reporters entered on Saturday, they were instructed not to photograph the faces of people living in the compound.

“They and their families might face retaliation in Turkey if they are identified,” Aslandogan said.

Regarding Erdoğan’s calls for extradition, Aslandogan said: “The US government position has always been that if there is any evidence of Mr Gülen breaking the laws, they will look into it. So far, the Turkish government hasn’t produced anything. Thank God, this is a country of laws, and we depend on that.”

Elaborating on the idea that Erdoğan may have staged the coup attempt, Aslandogan said Friday’s events did not match the pattern of previous coups.

“The coup appears to be poorly planned,” he said, “very poorly executed and everything seems to be playing into Erdoğan’s hands. There are many big question marks of how [this attempted coup] was executed.”

Supporters of Gülen expressed frustration over the accusations against the leader.

“This is a usual conspiracy against Gülen,” said Harun Gultki, who volunteers at the center and lives in a nearby town.