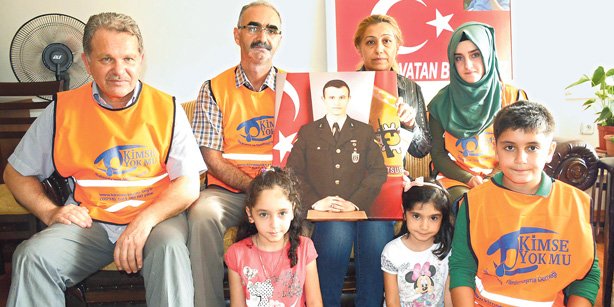 On Sept. 23 Kimse Yok Mu visited the family of noncommissioned officer Deniz Göçkün, who was martyred in a terrorist attack in Hakkari. (Photo: Cihan)

In a written statement, Cingöz said the Kimse Yok Mu administrative council had decided to help the families of the martyrs and victims of terrorism in a meeting on Sept. 7. Following the administrative council decision, Kimse Yok Mu applied to the İstanbul Governor’s Office on Sept. 17 to obtain the necessary permissions from the relevant state authorities. However, as of Oct. 20, there has still been no reply to the charity’s request.

Cingöz said that once they are granted permission from the governor’s office, Kimse Yok Mu will provide educational, physical and psychological assistance as well as food and household items to families of security personnel who fought against terrorism in Turkey.

Kimse Yok Mu, inspired by the faith-based Gülen movement, has come under intense pressure from the Justice and Development Party (AK Party) government in the last two years, with unwarranted investigations being carried out against the movement’s sympathizers.

The charity was among 607 nongovernmental organizations from around the world that were invited to the 2015 UN Sustainable Development Summit in New York City on Sept. 25.

The smear campaign against the charity is an example of the AK Party’s general animosity towards the Gülen movement, which is based on the teachings of Turkish Islamic scholar Fethullah Gülen. He has inspired millions of people worldwide with his work for global peace through education, social work and dialogue.

President Recep Tayyip Erdoğan accuses the movement of instigating the infamous corruption probes that were revealed on Dec. 17 and 25, 2013, which involved ministers from within his government and some of his family members.

Kimse Yok Mu is active in 113 countries around the globe. In addition to being internationally recognized and hailed for its global efforts, the charity is also an important implementing partner of the UN High Commissioner for Refugees (UNHCR).

Through a Cabinet decision in October of last year, in what was seen by many as an arbitrary move, the AK Party government withdrew the charity’s right to collect donations and organize aid campaigns without requiring permission from the relevant authorities.