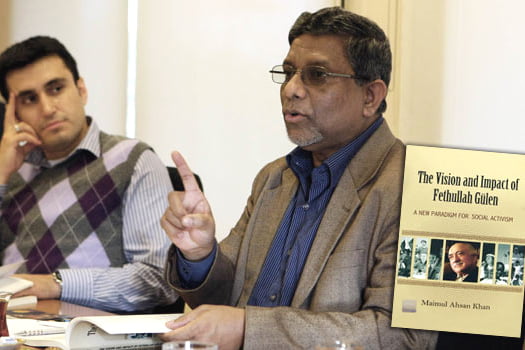 Professor Khan considers Gulen more of a scholar than a sufi but like a sufi his compassion encompasses everyone. He does not have prejudice against anybody. He also asserts that Gulen never permits the political exploitation of Islam.

Maimul Ahsan Khan, professor of Islamic Law, expounds Fethullah Gulen whom he got to know through a book in the US 10 years ago. Prof Khan says: “If I were a scientist, my biggest discovery would be discovering Fethullah Gulen.” Khan, who met Gulen, published his second book, the outcome of his research: “The Vision and Impact of Fethullah Gulen: A New Paradigm for Social Activism”. In his book Khan presents a different point of view on the educational model of Gülen movement, Gulen’s approach to democracy, and compares and contrasts Gulen with Sufism and Rumi. He considers Gulen more of a scholar than a sufi. He also asserts that Gulen never permits the political exploitation of Islam.

Khan visited Turkey last month, as the guest of Journalists and Writers Foundation. He introduced his second book on Fethullah Gulen and talked about the story of this book and his views on Gulen. Khan, professor of Islamic law at the School of Law at Dhaka University, said that he heard about Gulen in the US ten years ago through a book he got from one of his students. He conducted further research on Gulen after returning back to Bangladesh, and published his first book “Introducing Fethullah Gulen to the Bengal and Beyond”. His further studies yielded its fruit as the second book, where he describes the vision of Gulen and his impact in the world.

Khan states that Gulen blends science and religion well. “His compassion encompasses everyone. He does not have prejudice against anybody. He preaches forgiveness and opening hearts to everyone. I too write a lot of books but I don’t have plenty of readers. Gulen has millions of readers. As I started to understand him, I came to realize that he is a part of the community and he does not dictate his ideas, but I do; and that’s why people love and respect him.”

Khan reminds that as empires get bigger they fall apart, but as Gulen’s educational activities spread through the world, it is gaining strength. He also claims that it is not sufficient to call Gulen “Turk” as he is providing a universal perspective in understanding Islam and filling in a big gap. He is the Rumi, Dalai Lama or Gandhi of Islam today.

Source: Original article was published on following sites in Turkish and was translated by IDC members to English http://www.stargundem.com/guncel/1106165-bangladesli-profesor-fethullah-gulen-039-i-anlattigi-kitabini-ingilizce-yayinladi.html,