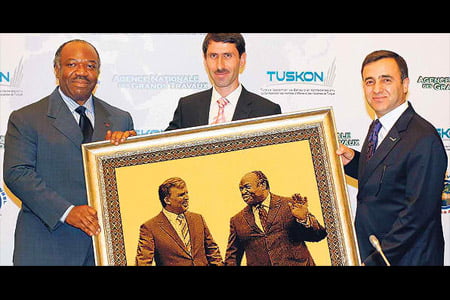 TUSKON officials presented a picture depicting the Turkish and Gabonese presidents hand in hand to Gabon President Ondimba during a forum held in İstanbul earlier this week. (Photo: Cihan)

Ondimba arrived in İstanbul earlier this week to attend a trade and investment forum organized by the Turkish Confederation of Businessmen and Industrialists (TUSKON).

The president’s remarks about Turkish schools came as he was talking about Gabon’s plans for a stronger future. Ondimba said his country is working to adapt its human capital to development. This refers to education and professional training with the goal to create jobs and add value to the Gabon economy, the president said, and added sectors such as banking and finance, the green economy and environment, higher education and professional and vocational training are all involved.

Turkish schools abroad are opened by volunteers inspired by the Hizmet movement, which is inspired by the teachings of Turkish-Islamic scholar and intellectual Fethullah Gülen. The schools promote educational and intercultural activities between Turkey and the countries they are opened in.

‘I want Turkish companies to invest in Gabon’

The Gabon president also made a call on Turkey’s companies and businesspeople to invest in his country in multiple sectors, adding Gabon has made a number of reforms to facilitate investment and the creation of businesses.

Gabon has rich oil and natural gas resources as well as mining opportunities in addition to hydraulic power generation potential. The African country’s head of state stressed that it has made many reforms to attract investment.

“In Gabon, many things have happened and evolved in the right direction in the past three years. … We have undertaken a number of reforms to facilitate the creation of businesses with simplified procedures, accelerated access to land titles and improved land allocation and adapted our tax system to provide more incentives,” Ondimba said. With the help of these reforms, Gabon is now attracting more foreign direct investment (FDI), mainly directed towards the wood processing industry, agribusiness and petrochemicals, according to the president. He also expressed the expectation that foreign investment in Gabon will increase in the near future.

In response to a question if he held talks with Turkish authorities over the selling of oil to Turkey, Ondimba said his discussions with his Turkish counterparts were focused on a broader vision and issues and not limited to material specifics. “We are not traders but leaders at the service of our nations on mutual interests. … What we want, discuss and try to implement is the foundation of long-term win-win multidimensional cooperation extended to the business community, developed by all sections of our populations.” The Gabon president also said companies in the two countries will take care of the issue of oil sales.

Ondimba went on to talk about his project for the development of his country, named “Gabon Emergent.” The president proposed his project during a presidential contest in 2009. The project is aimed to move Gabon from oil richness to a diversified economy. Ondimba said the project rests on three main pillars: Industrial Gabon, Green Gabon and Gabon of Services.

Industrial Gabon includes plans to better manage the country’s oil richness and increase revenues through boosting activities in the mining and industrial sector. “Gabon has lots of natural resources in and under its soil,” the president noted. Green Gabon mainly aims to develop the country’s forestry resources as a source of sustainable growth with an agricultural strategy guaranteeing food security for the Gabonese people. “I put extra emphasis on the strategic sector of ecotourism with Gabon’s unique potential in terms of fauna, flora, wildlife, forestry and 13 national parks,” Ondimba stated. And Gabon of Services refers to the reinforcement of Gabon’s human capital to the country’s needs and requirements. This refers to efforts exerted for improvement in such fields as banking and finance, health, information technologies, higher education and professional training.

The Gabon president in addition stated that his country initiated work to change the existing constitution in 2010, and efforts are under way to correct some imperfections and weaknesses in the document. Gabon’s parliament has so far approved changes to three paragraphs and 36 articles in the constitution.

“Experience showed us that our fundamental law [constitution] was facing various contingences that required a few adaptations. Any constitution should be very clear to the citizens without misinterpretation. This is the basis of democracy,” Ondimba said.

The African country’s head of state in addition expressed happiness over being in İstanbul on the first night of the holy month of Ramadan. “Our cooperation and friendship calendar matches the Islamic calendar. This is a very good sign for me to be in a friendly and brotherly country at this precise time we are seeking to bring our links to the next higher level. Let us all pray for Allah’s benediction of our vision and actions for our communities. Many Muslims would have loved to be and start the Holy month of Ramadan in Turkey, especially in İstanbul. I am very grateful to God the Almighty and to President Abdullah Gül,” he said, and wished all Muslims both in Turkey and across the globe a blessed Ramadan.