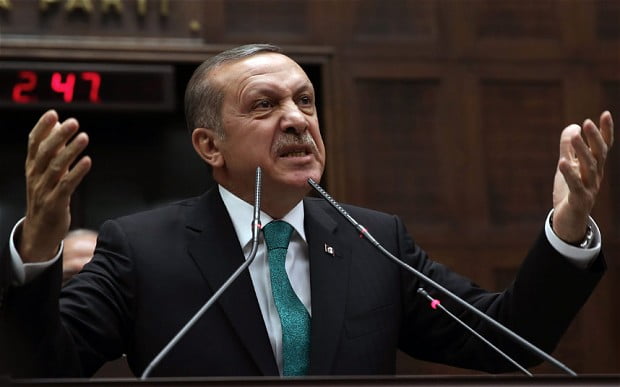 But Berlin appeared to dismiss the idea, saying it was important to keep channels open to a key partner in fighting terrorism.

More than 110,000 public servants – from soldiers and judges to teachers, politicians and journalists – have been detained, suspended or sacked since the failed military coup in July, in what President Tayyip Erdogan’s critics say has turned into a crackdown on all forms of dissent.

Turkish officials say the measures are justified by the threat posed by the coup attempt, in which more than 240 people were killed as rogue soldiers commandeered fighter jets and tanks, bombing parliament and other buildings.

The names of those barred from public service are published in the official government gazette, potentially making it hard for them to find work elsewhere. In addition, their passports are canceled.

Luxembourg Foreign Minister Jean Asselborn said people were also being stripped of their university degrees, and that many were being left with no income. Some dismissed teachers who were sole breadwinners have complained of being unable to feed their families.

“To put it bluntly, these are methods that were used during the Nazi era and that’s a really, really bad development,” Asselborn said.

He suggested imposing economic sanctions, pointing out that 50 percent of NATO member and EU aspirant Turkey’s exports go to the EU and 60 percent of investment in Turkey comes from the bloc.

“At a certain point in time, we won’t have any choice but to apply it (sanctions) to counteract the unbearable human rights situation.”

The German government poured cold water on the proposal.

Interior Minister Thomas De Maiziere said while it was important to criticize the arrests of politicians and the limitation of press freedom, one should also keep in mind that Turkey, bordering Syria and Iraq, was a key ally in the fight against terrorism.

“A differentiated look, also to safeguard our interests, is the right approach,” De Maiziere told fellow party members of the conservative bloc.

Chancellor Angela Merkel’s spokesman said Berlin would not get involved in discussion about potential sanctions.

“That’s why it’s important to keep the channels of communication open.”

Erdogan says Turkey alone can decide how to respond to the coup attempt, which they accuse U.S.-based Muslim cleric Fethullah Gulen of orchestrating through a network of supporters. Gulen has condemned the action and denied any involvement.

Turkey’s EU Minister Omer Celik said Ankara’s actions should be equated to efforts to “protect democracy during the fight against the Nazis”.

“The Nazis are like apprentices when compared with Gulenist terror organizations … We are talking about an organization that has massacred its own people with warplanes, tanks, warships and helicopters. Nobody should think that we will take a step back in our fight against them.”

Erdogan said on Sunday he did not care if Europe called him a dictator and accused European nations of abetting terrorism by supporting Kurdish militants.

Turkey has also threatened to cancel a deal with the EU to prevent refugees from the Middle East crossing into Europe in return for an acceleration of its EU membership application and visa-free entry for Turks.

(Reporting by Michelle Martin and Andreas Rinke in Berlin and Tulay Karadeniz in Ankara,; Writing by Michael Nienaber; Editing by Kevin Liffey)