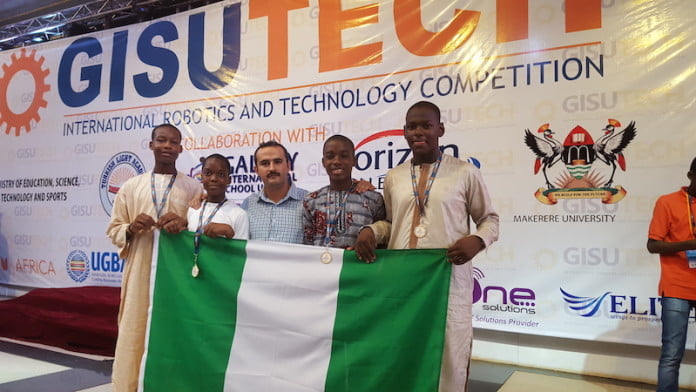 Considering the excellent performance of its students at various national and international competitions and examinations, which has placed Nigeria in global pedestal, the Nigerian Turkish International Colleges (NTIC) has demonstrated that institutions should not only be assessed based on their position in global rankings, but by students’ performance. Uchechukwu Nnaike reports

There are no better criteria for measuring academic excellence of an institution of learning order than the academic achievements of its students. Academic excellence is not an accidental occurrence, but a result of hard-work supported by the right kind of investment in educational infrastructure.

The Nigerian Turkish International Colleges (NTIC) has distinguished itself as a centre for academic excellence following the achievement of its students over the years, even on global stage.

NTIC, one of the investments of First Surat Group, a company whose main investment is in the area of education, health and social works, whose objective is geared towards building human resources and raising responsible individuals that are equipped with necessary skills and knowledge of the contemporary world, has been operating in parts of Nigeria for some years.

First Surat Group brought its investments from Turkey which financed the schools popularly known as Nigerian Turkish International Colleges, which currently has a total of 16 educational institutions in Abuja, Kano, Lagos, Kaduna, Yobe and Ogun States with staff strength of over 1,000 academic and non-academic personnel.

Today, NTIC has a total of 4,025 students, 17 per cent of who are on scholarship. The academic conglomerate is science-oriented with focus on building knowledge based on core moral values, which the modern society is in dire need of.

In pursuant of its goal, the staff of the institution have, through dint of hard-work, raised and are still raising exceptional students like Master Ebubechi Ezenwanne, a young talented student of NTIC Abuja that got the perfect score of 800 both in Mathematics and Physics in SAT II. SAT II was formerly known as the College Board Achievement Tests. The test is intended to measure a student’s knowledge of a particular subject. Its tests score present a more personalised portfolio that illustrates how well you would fit at a particular school. Most colleges use SAT II scores for admission purposes, programme placement and counseling. Generally, SAT II tests are one hour long and consist of multiple choice questions.

According to the testimonies of his teachers, Ezenwanne is a young talented student who has demonstrated an uncommon quintessence of academic excellence. They said his penchant for achievement distinguished him from his contemporaries. He was also described as generally humble, focused and ever willing to embrace new ideas.

One of his tutors said: “As a matter of fact, he has shown a high sense of responsibility both in learning and character. This qualities, paid off, when Ezenwanne held the world spellbound with his unprecedented score in SAT II. The SAT is one indicator of how ready a student is to handle college-level work. The test measures what one learnt in high school and how well one can apply that knowledge.”

Another student of the college is Atiku Bugaje, who travelled to far away Georgia, Tbilisi last month to compete alongside other students from 30 different countries. The challenge was the International Young Inventors Olympiads (IYIPO), organised in Tbilisi. It is a scientific project Olympiad where students all around the world compete with each other.
More than 30 countries with 150 projects participated in this year’s edition. IYIPO is supported by the Ministry of Education and Science, and also sponsored by the European Union Representative in Georgia, International Black Sea University (IBSU), Georgian Patent Office, and the State of Georgian 1 Channel.

It was another glory for Chilolum Nwigwe Christopher, a student of NTIC Abuja, who participated and won a bronze medal at the Pan African Mathematical Olympiad in Senegal, Dakar last month.
Explaining the secret behind the successes, the spokesperson for the First Surat Group, Mr. Cemal Yigit, said: “Success is a tradition here at NTIC; we are well known for our educational excellence and working very hard to stay on top. This testimony has followed the school over the years and it is not just an accident, but as a result of deliberate efforts put together by both the staff and management of the school, with the cooperation of the students.”

On November 14, 2015, Dambata shared the stage with notable personalities like former Sports Minister, Bolaji Abdullahi, Charles Oputa (popularly known as Charly Boy), Kiki, among others to discuss in a TED Talk programme titled TEDx Jabi at the Sheraton Hotel, Abuja. The event attracted notable speakers from all walks of life. TED is a global community, welcoming people from every discipline and cultures, especially those who seek a deeper understanding of the world. It believes in the power of ideas to change attitudes, lives and ultimately, the world. Talking on the theme ‘Determination, Drive and Discipline’, Dambata made the institution proud.

NTIC has proven at home and abroad to be an institution with a drive for academic excellence, this is evident in the achievements of its students participating in any academic competition like the Cowbell National Mathematics Competition in Nigeria, among others. The recent one is Yusuf Abdulmueez from NTIC Abuja, who became the top student in 2015 Cowbell National Secondary Schools Mathematics Competition as the tradition goes on for NTIC.

In April 2015, students of NTIC took part in an international project competition in Kazakhstan, the Infomatrix Asia-Pacific, organised by the Education and Commission for Science and Technology of Kazakhstan. The competition had participants not only from Asia-Pacific, but also from all over the world. A total of 315 students from 22 countries participated in the science and innovation project competition, with 183 scientific and technological projects. Nigeria was represented by NTIC students who competed in the hardware control category and returned home with a silver medal.
The excellent performance of the academic conglomerate has proven to the rest of the world that Nigerians can be leaders in education delivery with the right environment and opportunity.