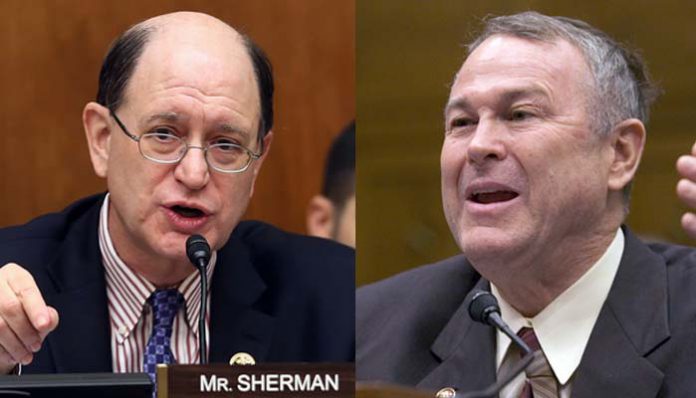 Speaking during a House Foreign Affairs subcommittee hearing on Thursday concerning violence perpetrated by Erdoğan’s bodyguards on protesters outside the Turkish ambassador’s residence last week, Sherman said the Turkish government has made a number of claims for the extradition of Gülen due to his alleged involvement in a failed coup last summer.

“I think we have to declare very firmly: They’ve got no credibility,” he said.

He also added: “There is nothing that makes me feel better about Mr. Gülen than the attacks that come from Ankara. I mean, I was suspicious of the guy until I heard the attacks from Ankara.”

Also speaking during the subcommittee hearing on Thursday, Congressman Dana Rohrabacher described Erdoğan as a “fascistic megalomaniac in charge of the government of Turkey who is … consumed with his own power.”

Angry about the violence committed by Erdoğan’s bodyguards against American protesters outside the Turkish ambassador’s residence in Washington last week, Rohrabacher said the present government in Turkey is totally different from those people who worked with the US during the Cold War.

“Obviously you have a fascistic megalomaniac in charge of the government of Turkey who is so consumed with his own power that he thinks he can call people together and tell us we were wrong when we see our citizens being beaten into the dirt, American dirt,” he added.

“They are no longer our friends because the head of their country now can watch this [violence in Washington, D.C.] and then call our ambassador in to castigate us after seeing this firsthand. He saw this firsthand. One wonders when he talks about Gülen, we have to take into consideration what he did here,” he said.

Underlining that Erdoğan has used last summer’s coup attempt in order to destroy his opposition or anyone who disagrees with him in Turkey, Rohrabacher said: “He wants to close down all these schools [affiliated with the faith-based Gülen movement, inspired by Gülen’s views]. We should probably note that the Gülen movement is a very positive thing … this should cement what we think of them.”

Demonstrators protesting the policies of President Erdoğan, who was visiting Washington for a White House meeting with Donald Trump last Thursday, were countered by agitated supporters of the Turkish head of state and subsequently attacked by the Turkish president’s bodyguards, footage of the incident shows. Another video clip shows Erdoğan apparently giving the order for his security detail to attack the protesters and watching it unfold outside the ambassador’s residence on Sheridan Circle.