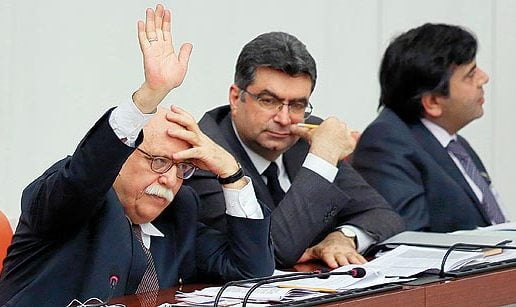 The Justice and Development Party (AK Party) government’s controversial proposal to ban privately owned preparatory schools was put to a vote and passed by Parliament late on Friday night in a session that 90 deputies from the ruling party did not attend.

The legislation requires the closure of all prep schools before Sept. 1, 2015 and would terminate the tenure of tens of thousands of bureaucrats within the Ministry of Education. It passed in Parliament with 226 yes votes and 22 no votes.

A number of members of the opposition Republican People’s Party (CHP) and Nationalist Movement Party (MHP) expressed their objections to the law in Parliament on the grounds that the legislation is unconstitutional. Much political wrangling and even altercations between ruling party deputies and lawmakers from the opposition parties took place during the debate of the legislation.

Millions of students go to the centers to prepare for entrance examinations to gain one of the limited spots at state high schools and universities. The law allows schools that meet the requirements to become private schools and for the Ministry of Education to recruit some of the teachers to work in public schools.

The Organization for Economic Cooperation and Development (OECD) ranks Turkey as “average” in literacy, math and science, and although Prime Minister Recep Tayyip Erdoğan has said abolishing the preparatory schools is part of a larger reform on an “unhealthy” educational system, the move is considered to be part of his fight against the Hizmet movement, which is active in the field of education.

In reference to the Hizmet movement, which is inspired from the teachings of Islamic scholar Fethullah Gülen, Erdoğan told a crowd at a campaign rally in the western town of Denizli on Saturday: “Pull your kids out if of these schools. State schools are enough.”

“They [members of the Hizment movement] are like leeches, but leeches are more virtuous; leeches suck dirty blood, but they [Hizmet] suck clean blood and curse me, my wife, my children and my administration.” The government first moved to shut down the educational centers last November, deepening the highly public row with the Hizmet movement.

The new legislation excludes the term “dershane” (preparatory school) from the definition of private educational institutions. The existing preparatory schools will have until the 2018-2019 academic year to transform themselves into private schools if they desire to do so.

If approved by President Abdullah Gül, the legislation will widen that gap, critics say.

Ayşe Bulut Yanılma, a female teacher who used to work at a prep-school affiliated with Turkey’s Gülen group, has been arrested by a Turkish court hours after she had a surgery at a Kocaeli hospital.