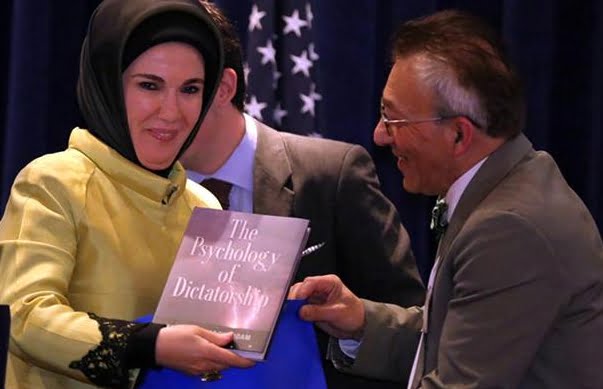 Fathali M. Moghaddam, an Iranian professor at Georgetown University, presents Emine Erdoğan with one of his books, 'The Psychology of Dictatorship'

Organisations including PEN International have spoken out about the ‘grave impact on democracy’ caused by major crackdown on book trade.

The closure of 29 publishers by the Turkish government has been condemned by the international publishing community, which described the move as outrageous and warned that it would have a “grave impact on democracy”.

President Recep Tayyip Erdoğan’s government used a state of emergency law to close the 29 publishing houses last week, along with a swath of newspapers, television channels, magazines and news agencies. According to the Turkish Publishers Association, the decree means that all goods, assets, rights, documents and papers belonging to the publishers will be transferred free of charge to the Turkish treasury, with no appeal to be made, and the prospect of further publishers being shut down in the future.

The closures follow the coup attempt last month, which has been blamed on followers of the US-based Muslim cleric Fethullah Gülen, and in which more than 200 people were killed and thousands injured.

The Turkish Publishers Association said that while it opposed the coup attempt, the closure of the publishing houses, which are alleged to be affiliated to Gülen’s network, “carries the risk of human rights violations, the stifling of freedom of thought and expression and also irreparable financial and moral losses”.

In a statement translated by the International Publishers Association, the TPA said that authors and translators whose works were translated by the 29 publishers would suffer, as they would be unable to collect money owed to them. So, too, would the publishers’ employees who “with no criminal involvement, will also be denied their rights, their jobs, and any outstanding wages”.

“We hope that the constitutionally guaranteed principle of ‘innocent until proven guilty in a court of law’ will be respected, that the rule of law and democratic principles will be respected, and that any action that may prevent freedom of thought and expression, freedom to publish and the right to news and information will be avoided,” said the TPA.

Their closure was also protested by free speech organisations English PEN and PEN International. “The closures [are] a worrying sign that the authorities are using the failed coup to further crack down on the already parlous state of freedom of expression in the country,” said Salil Tripathi, chair of PEN International’s Writers in Prison Committee. “We fear the struggle to restore freedoms in Turkey will be a long one and urge the government to review these closures as a matter of urgency and to ensure that the rights of writers and publishers are protected.”

Jo Glanville, director of English PEN, said: “The coup posed a serious threat to the Turkish state, but the closing down of publishers, alongside the mass sackings, detentions, arrests and allegations of torture, will have a grave impact on democracy. The crackdown on freedom of expression was already a continuing concern. The coup now appears to be an opportunity for Erdoğan to purge Turkey of his opponents, including his former allies, the Gülenists and anyone alleged to be affiliated with them.”