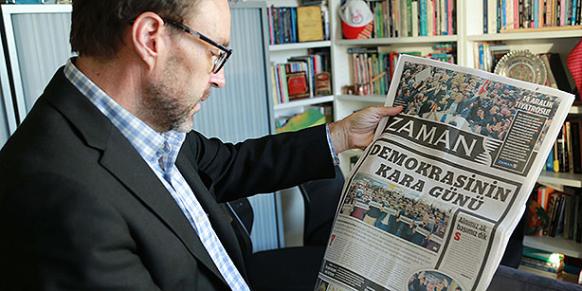 Speaking with Sunday’s Zaman regarding the ruling Justice and Development Party’s (AK Party) unlawful practices that pose serious threats to the country’s path to democracy, Barton stated that President Recep Tayyip Erdoğan is now contradicting his discourse and actions of two years ago, adding that remaining in power for so long leads to political administrators becoming intoxicated by power.

“Unrestrained power will eventually tempt those politicians and cause serious damage to earlier political gains in terms of democracy and rights. Erdoğan did a great job for the last 10 years, but he already forgot the lessons he learned in his youth as a result of remaining in power for so long,” Barton noted.

Commenting on the Dec. 14 government-led retribution operation against the Zaman and Samanyolu media groups, who Erdoğan and the ruling party believe plotted against the government as regards the Dec. 17 corruption investigation, Barton pointed out that many outside observers would be confused by the government’s actions against the press.

“But I do notice in the international press account that these people are looking at the overall context over the last decade and particularly the last two years. My view as somebody who has been travelling to Turkey for the last decade and following the events closely, it’s tremendously saddening because I have affection and respect for Turkey, and what’s happening is just unnecessary. I mean I had respect for Erdoğan as prime minister… I think if he had retired two years ago he would be rightly remembered as a transformative leader. Now as president, he seems to be driving a series of actions which are very hard to explain, except in terms of personal ambition and personal vulnerability. I feel very sad because he is a man throwing away a big reputation. He leads a country that faces very serious challenges, the economy is slowing down because it faces economic headwinds. Its region, you know where it used to be a policy of zero enemies, now there are problems all around. It is not Turkey’s fault, but Turkey has to deal with these challenges,” Barton emphasized.

According to Barton, Erdoğan has had a tendency towards a non-democratic direction for the last two years so that anyone who criticizes him or accuses him of anything is in return accused, but despite that many people continue to argue that there is significant evidence of corruption in the government.

Underlining that many governments, particularly those with developing economies, face problems with corruption, Barton said: “The important thing is when this is brought out, to face it and address it. But it seems that Erdoğan has not taken those criticisms kindly and has chosen to interpret any kind of criticism as a threat to his government.”

Remarking on the arrest of several key media figures and the substantial pressure on members of the faith-based Hizmet movement — inspired by Islamic scholar Fethullah Gülen — that represents Turkey’s largest civil society organization, Barton defined the movement as non-violent and a genuine progressive civil society movement. He further added: “The movement is strongly committed to education through schools, colleges, universities and through media. That begs the question, why would a government, now a president, turn on such a movement? I think because Erdoğan is feeling embarrassed for having been accused of being involved in corruption. It is very embarrassing to face that accusation, but rather than deal with it, he says everyone who criticizes him is an enemy.”

Barton also drew attention to those journalists and media outlets that are offered positive incentives while others are being threatened to remain silent in the face of government wrongdoing. He went on to say: “These people [members of the movement and those journalists] are consistently displaying integrity and can’t be bought. I know this from things I observed. They are not taking the offers that are given to them nor can they be easily intimidated. Dealing with such people makes you very angry. They [the government] are trying to silence them.”

Noting that the AK Party and the Hizmet movement travelled side-by-side for a decade, during which time the government benefited from this partnership, Barton said the government began applying pressure on the movement since it has spoken of the unpleasant truths concerning graft within the ruling party.

“Rather than accept the criticism or answer questions, it appears that he is trying to silence his critics. If he can’t buy them off, if he can’t intimidate them, then he has to confront them directly. I’m concerned about people who have been arrested. I’m concerned for the future of the Turkish state at a time when it faces great challenges. I feel sorry that Erdoğan has damaged his reputation after years of hard work by doing these silly things. I believe that in the long run Turkey will come out of it stronger,” he further commented.

In reference to the operation against the Zaman and Samanyolu groups, Barton highlighted that any effort by the government to stamp out all of its critics will not be possible.

He also criticized Erdoğan’s statements slamming the European Union: “I know that Erdoğan says he doesn’t care what Europe or America thinks. I can understand the nationalist sentiment. But actually no country today can afford to disregard international opinion because economic investment and cooperation is very much a matter of confidence. What Turkey is doing is eroding confidence, not just in its government and judiciary, but also in its economy, and that can damage Turkey.”

Turkey will enter a difficult period

Regarding the arrest of Karaca and several other figures, Barton stressed that they were not arrested because they have done something wrong, adding: “I see them as victims. I’m not saying everyone is perfect, or that no one is at fault. I think what’s happening here is basically ‘shooting the messenger.’ When somebody tells you something you don’t want to hear, rather than accepting it, like an olden day king or sultan if the messenger comes with something you don’t want to hear, you shoot him or cut his head off with the sword. This is not what a leader should do.”

He further commented that Turkey will go through a difficult period, continuing: “But still it will come out the other side. I just hope not too much damage is done in the transition. I think the best that we can do is politely, patiently and graciously, yet firmly, make these sincere observations and criticisms, and encourage other people in the government, civil service, judiciary, police and military to be courageous enough to speak up as well. If everyone can see what is right and what is wrong, then we can correct the mistakes that have been made. It shouldn’t be that one man can threaten an entire nation just because he himself is very unhappy, or he feels his reputations is damaged. Ironically in doing so he damages his reputation, threatens his own family and friends, and destroys the things he has been building up for years.”