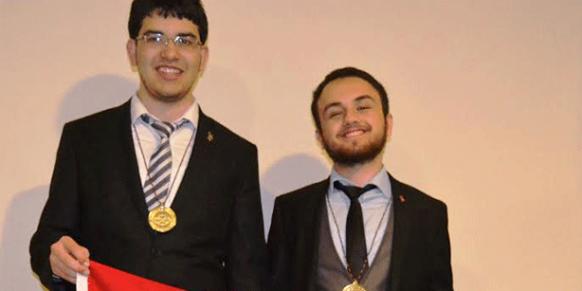 Osman Akar and Emre Girgin, who won a gold medal and a silver medal respectively at the 55th International Mathematical Olympiad (IMO), pose together in this July 13 photo. (Photo: Cihan)

Osman Akar, a student from the private Yamanlar College in İzmir, has won a gold medal at the 55th International Mathematical Olympiad (IMO), which was held in Cape Town.

Students from 106 countries around the world participated in the event from July 3-13. Akar was among students on a math team chosen by the Scientific and Technological Research Council of Turkey (TÜBİTAK), and was the only student from Turkey to win a gold medal in the competition.

Emre Girgin, another student from Yamanlar College, won a silver medal at the Olympiads.

Speaking with reporters about his success at the prestigious math competition, Akar said he is glad to see the Turkish flag flying among the winning countries at the Olympiads. He said that he dreams of studying at one of the world’s most prestigious universities in the field of mathematics; he hopes to one day become a prominent scientist.

Sebahattin Kasap, the general director of the Yamanlar education institutions, told the press that it is an honor that a Yamanlar school’s student won a gold medal at the competition, adding: “Out of the 413 total medals won so far by Turkish students at international science events, 146 have been won by students from our schools. We have the most successful Turkish schools at international science competitions. We also expect that our students will win medals at the International Chemistry Olympiadto be held next week.”