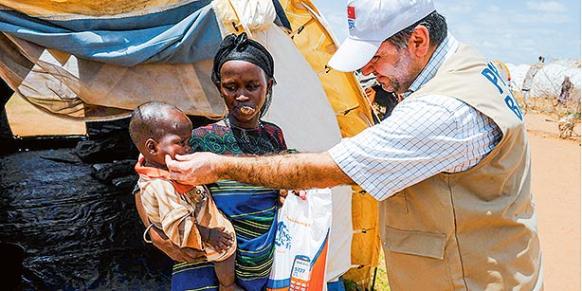 The decision rescinds the organization’s right to collect charitable donations.

According to critics, the decision is arbitrary and part of the government’s ongoing hate campaign against the Hizmet movement, one of the largest faith-based communities in Turkey. Kimse Yok Mu is influenced by Hizmet.

Kimse Yok Mu has already taken action against the government decision and filed three separate lawsuits. Organization’s lawyer, said some public officials, in reference to Cabinet members, have contributed to the government’s unlawful and anti-democratic decision against Kimse Yok Mu. Kimse Yok Mu have appealed to the Council of State for a stay of execution for the decision. In addition, the organization have filed lawsuits against Interior Minister Efkan Ala and some Cabinet members as well as some media organs that have been producing false stories about Kimse Yok Mu. The organization seeks TL 1.1 million for damages as part of the lawsuits.

Last week, the Taraf daily ran a story arguing that the Justice and Development Party (AK Party) government planned to remove Kimse Yok Mu’s public interest status, which would prevent it from collecting donations. The report indicated that the proposal was pending with the Cabinet and it was expected to take effect after being published in the Official Gazette following the Eid al-Adha holiday, which will begin on Saturday.

However, the decision came even before the holiday, when the group might ordinarily expect to collect a considerable amount of donations. İsmail Cingöz, the president of Kimse Yok Mu, announced the Cabinet decision via his official Twitter account on Thursday.

Kimse Yok Mu is the only aid organization in Turkey that holds UN Economic and Social Council (ECOSOC) special consultative status, and it began to develop internationally recognized relief programs in partnership with the United Nations Human Rights Council (UNHRC) in 2013. It was also awarded the Turkish Grand National Assembly Outstanding Service Award in 2013, under AK Party rule.
However, a campaign to smear the organization was launched after the Dec. 17, 2013 government corruption investigation of leading AK Party figures became public. President Recep Tayyip Erdoğan, who was previously prime minister and AK Party chairman, has targeted Kimse Yok Mu, which is affiliated with the Hizmet movement due to an apparent government grudge against the grassroots Hizmet movement which it holds responsible for the corruption investigation.

The president of the Law and Life Association, lawyer Mehmet Kasap, said the decision to remove the status of public interest against Kimse Yok Mu is arbitrary and not transparent. “The decision has no noteworthy legal grounds. And it is unlawful for this reason,” he noted.

Kasap also said the deputy prime minister has placed himself in a dire position due to his statement prior to making public the government decision against Kimse Yok Mu. “There are a few possibilities. Arınç either does not know [the content of documents of] what he undersigns or he does not have an idea of what is discussed in the Cabinet. Or he is openly lying.”

However, it emerged on Oct. 2 that Cabinet had made its decision against Kimse Yok Mu on Sept. 22 and a document was undersigned by Cabinet members, including Arınç, to certify the decision.

The activities of Kimse Yok Mu was closely audited by inspectors assigned by the Interior Ministry earlier this year and a report prepared by these inspectors, which made its way to the press last week, stated that not a single flaw was discovered in the organization’s activities. In their report, inspectors asked the ministry to allow Kimse Yok Mu to preserve its status of public interest and collect donations.

Nurettin Aktaş, a founding member of the ruling AK Party, said the government’s decision against Kimse Yok Mu stems from the government’s grudge against the Hizmet movement, which peaked after the corruption investigation of Dec. 17, 2013. “The [government’s] hostile attitude against the Community [Hizmet movement] has reached aid organizations,” he noted, adding: “They [government] have declared a war against Hizmet. It is not a proper attitude for a man of state and government members to make decisions due to a personal grudge. It will harm our country to prevent the activities of a charity organization.”

Arınç’s apparently false statement about a Cabinet decision and Kimse Yok Mu has drawn the ire of the opposition’s leading figures.

Republican People’s Party (CHP) Chairman Kemal Kılıçdaroğlu said on Oct. 2 that Arınç’s statement led to concerns in the public that the deputy prime minister might have undersigned the Cabinet decision against Kimse Yok Mu without having seen the decision. “They [Cabinet members] may have undersigned a blank document [whose content was later filled in.] God knows how many such documents Arınç undersigned. He either undersigned the document [against Kimse Yok Mu] without seeing its content or he lied to the people. He is the government’s spokesperson. He should quit his seat after this scandalous statement,” Kılıçdaroğlu noted.

Nationalist Movement Party (MHP) Deputy Chairwoman Ruhsar Demirel believes Turkey is losing the democratic achievements it has made recently due to the AK Party’s growing suppressive policies. She said the state should stand on an equal distance to all individuals and faith groups and added that the decision against Kimse Yok Mu is reminiscent of some anti-democratic practices of the Feb. 28, 1997 coup era.

“The [AK Party] government has been making concessions on democratic values and achievements,” she said. She also said it is unwise for state officials to make decisions against freedoms and rights.

Demirel also believes that Arınç’s statement about Kimse Yok Mu and a Cabinet decision against the organization that came despite the said statement have made the legitimacy of the government contestable. “Is there a mechanism [or person] that makes decisions despite the Cabinet?” she asked.