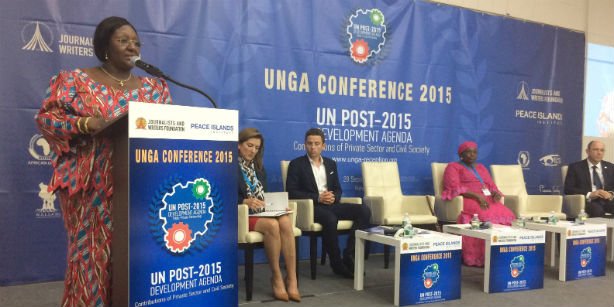 Speaking in a morning session, Central African Republic Education Minister Eloi Anguimate underlined the contribution of the civil society to development of countries through education. Stating that it is impossible to achieve sustainable development only through the hands of the state without the support of the civil society and private sector, in this regard, Anguimate praised the activities of the Gülen movement, a civil society movement inspired by Turkish-Islamic scholar Fethullah Gülen which is active throughout the world including Central African Republic.

Noting that he traveled to Turkey two months ago and he had talks with officials from Turkish charity Kimse Yok Mu (Is Anybody There?), which is also affiliated with the Gülen (Hizmet) movement, the Central African minister said he asked them to open more educational institutions in his country, which he said provides high-quality education.

The minister underlined that education is needed not just for development but also to establish peace and stability in the country, adding that chaos, violence and migrant tragedies witnessed in various countries across the world can only be prevented through education.

GYV Deputy President Hüseyin Hurmalı also delivered a speech during the panel, saying the GYV has contributed to UN’s Sustainable Development Goals for 2030 ahead of this year’s summit. Stating that UN’s Sustainable Development Program includes goals to improve cooperation of the state institutions with private sector, Hurmalı said the Hizmet movement has already achieved these goals in its activities across the world. “We organized this panel to share inputs and outcomes on this issue,” he added.

The Gülen movement is a group of volunteers engaged in interfaith and intercultural dialogue inspired by the ideas of Gülen, whose teachings promote mutual understanding and tolerance between cultures. Now residing in the US, Gülen has pioneered educational activities in a number of countries, along with efforts to promote intercultural and interfaith activities around the world.