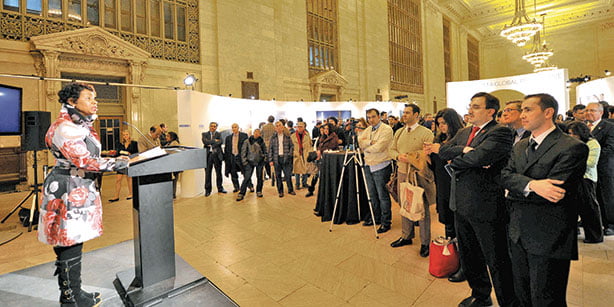 NEW YORK
A reception for the “Türkiye’de Zaman/Time in Turkey” photo exhibition on display at Grand Central Station was held in New York on Monday.

The reception brought together Turkish and foreign diplomats, politicians and members of the arts and cultural world.

New York Representative Yvette Clarke said the exhibition is a significant work that introduces Turkey to the world. Congratulating the organizers on holding the exhibition in a place like Grand Central Station, which is used by a million people every day, Clarke also commended the 25 photographers who brought Turkey and the everyday lives of Turkish people to New York. She also presented a plaque to the Zaman daily on behalf of the House of Representatives.

Delivering an address at the reception, Today’s Zaman editor-in-chief Dr. Bülent Keneş spoke about the background of the project, which was conceptualized during Zaman’s 25th anniversary. “Twenty-five photographers from around the world were invited to Turkey and shot photos for days in different parts of Turkey, from one of the biggest cities of the world, İstanbul, to a remote village in Anatolia,” Keneş said, pointing out that the end result has become one of the best visual works about Turkey.

Member of the New York State Assembly, Steven Cymbrowitz, said in his address that he has been to Turkey five times and reads Today’s Zaman regularly. Stating the significance of opening an exhibition in a prestigious venue like Grand Central Station, Cymbrowitz also presented a plaque to Zaman on behalf of the state-level House of Representatives.

The exhibition “Time in Turkey” has been on display at the historic Grand Central Terminal for six days.

Photographers from around the world including Anthony Suau, Steve McCurry, Reza, Anders Petersen, Jane Evelyn Atwood, Ami Vitale, Paolo Pellegrin, Christopher Morris and Rena Effendi took photos of Turkey as part of the “Time in Turkey” project. The exhibition was on display in cities such as London, Brussels, Athens, Thessaloniki, Vienna and Berlin.

Stories from across Turkey

As part of “Time in Turkey,” the photographers also showed human stories from all over Turkey. Atwood went into a coal mine in Zonguldak while Bruno Barbey reflected on the historic nature of İstanbul. Samuel Bollendorff researched on lives changed by water in southeastern Anatolia while Eric Bouvet participated in the night shift of policemen in İstanbul.

Kathryn Cook searched for traces of a thousand-year-old civilization in the district of Ahlat in Bitlis province while Claudine Doury shot young female textile workers. Carolyn Drake focused on the culture of football in Turkey, Michel Vanden Eeckhoudt was hosted by nomads in Mersin region and George Georgiou captured the change in Anatolia. Morris shot photos of President Abdullah Gül and his inner circle while Pellegrin observed oil wrestling in Edirne.

Turkish Americans have fed and entertained the governor and other high officials at celebratory events. They’ve bestowed awards on local luminaries. They’ve sponsored subsidized tours of Turkey for Vermont legislators. And they’ve opened a spacious office in Burlington to serve as a gathering place both for members of their own community and as a hub for their efforts at cultural and educational outreach.