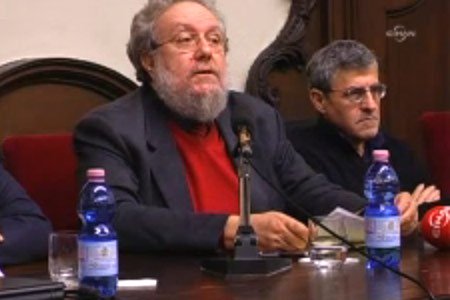 Professor Francesco Zannini, a prominent figure in the field of Islamic Studies in Italy, described Fethullah Gulen as a true “lover of the Prophet Muhammad (pbuh).” At a conference held at Torino University about Fethullah Gulen and the Gulen movement (aka Hizmet movement), Dr. Zannini explained he saw that preserving religious values did not require one to forgo any modern development, as he took into consideration the social, cultural, and historical environment where Gulen grew up..

The Italian professor underlined that this was particularly evident in the schools established in accordance with Gulen’s ideals.

Islam is a religion open to discussions and the exchanges of ideas. Dr. Zannini stated, “The essence of Islam is in fact dialog and reconciliation.” Dr. Zannini suggested that Gulen’s model of “spiritual maturity” has proven that living like the Prophet (pbuh) and his companions is possible in a modern society, indeed.

Some groups in Turkey have accused Fethullah Gulen of attempting to revamp Islam but altering its roots. However, according to all of the works he has read so far, Dr. Zannini has come to a conclusion directly opposing these accusations. “Gulen lives his religion well and encourages others to live in unity and solidarity with all other cultures and religions,” says the professor.

Dr. Francesco Zannini is a faculty member at the Papacy in Islamic and Arab Culture Research University, which is affiliated with the Vatican. He spent many years in Bangladesh and Egypt researching Islam and Dr. Zannini has been leading a comprehensive academic study about the Gulen Movement since April.

Organizing this program, President of the Alba Intercultural Dialog Association, M. Fatih Camlica, stated that Fethullah Gulen places human beings in the center of the world and he urges us all to love and respect them just because they are human beings; and this can only be accomplished through dialog.

Before concluding, a few of Fethullah Gulen’s books that were translated into Italian were introduced and Noah’s pudding was served.

I have long been an admirer of Fethullah Gulen not only because he speaks of and promotes a compassionate version of Islam, but also because the movement he has inspired enables that vision by establishing educational institutions that practise and embody what they teach.