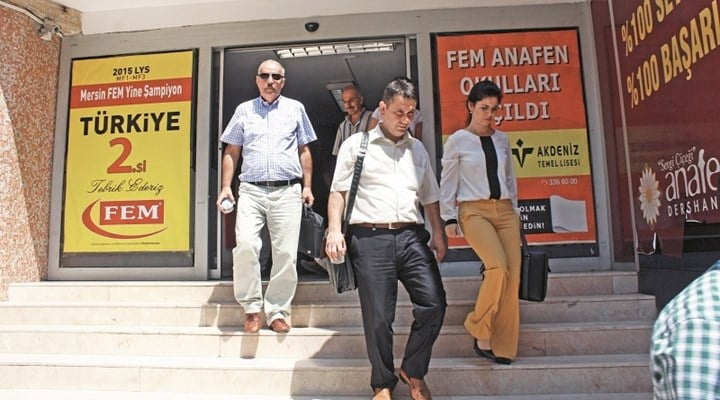 Reaction has continued to grow against the politically motivated raids targeting private businesses and schools across the country, with new raids hitting eight prep-schools in Mersin province, southern Turkey, on Tuesday morning.

In what has been lambasted as a political motivated attempt to slander and intimidate the institutions, the prep-school officials’ were subjected to questions from the size of a school sign, the color of a door mat, or whether or not their exterminator firm had a license.

Prep-schools belonging to Anafen and Fem have repeatedly been subjected to arbitrary inspections which have found nothing wrong. Notably, these raids are being conducted by the police who are deliberately having individuals file anonymous tips with slanderous claims, even to the Financial Crimes Investigative Board (MASAK).

Legal experts point out that the ongoing targeting of business groups and individuals through such raids, simply over their beliefs or their social affiliations, constitutes clear discrimination, a hate crime and an organized crime, in addition to violating of scores of other laws and rights. These violations include generating false accusations, which carries a prison term of up to three years, as well as attempting to prevent educational activities of a government approved organization through threats.

On Tuesday, Judge Kemal Karanfil took to Facebook condemning the nation-wide raids targeting the schools, calling the measures “a violation of the individual and proprietorship rights and freedoms as outlined by the constitution.” He stated that the raids were reminiscent of “Nazi Germany, Fascist Italy, Stalin’s Russia and even how Israel is treating Palestinians.” Judge Karanfil elaborated, “Everyone knows by now that these measures are being conducted under the influence of powers who feel they have a vendetta against a section of society… One day the judiciary will be independent and bring those who discriminate and commit hate crimes against a certain section of society to justice.”

“They are attacking the schools image and proprietorship rights,” adds Samanyolu Educational Institutions Lawyer Şaban Yağcı, who emphasized that the raids were deliberately being conducted in an attempt to try to find irregularities that could be used against the schools. “These institutions have been inspected eight times by the Ministry of National Education, Social Security Institution, and the Ministry of Finance. This shows that the raids harbor cruel motives.” Yağcı added that a case will be filed against the governor.

Eskişehir Samanyolu Private Education Institution and FEM prep schools lawyer Selamet Şen expressed that the manner in which the raids were conducted clearly shows that the police are spearheading the operation, another indication of the political motives and attempt to intimidate parents and students. “The Chief of the Anti-Smuggling and Organized Crime branch are coming to the inspections. If they are coming in for security concerns, they don’t have the right to intervene. I cannot believe that the police have left everything else behind and are solely focusing on harassing educational institutions. We have filed cases, and if the courts rule for no grounds of prosecution, than we will re-file them until the day comes that the rule of law returns to this country.”