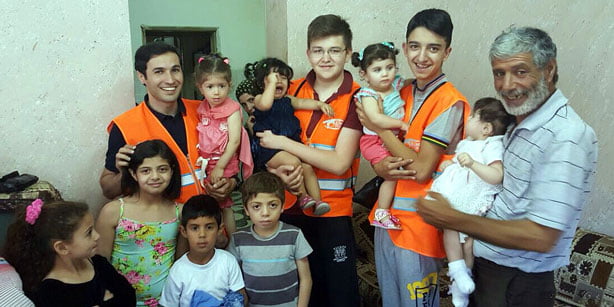 He said Kimse Yok Mu had applied to the authorities to obtain permission but that its applications were consistently rejected for various reasons. Criticizing the provincial directorate and the governor’s office in successive tweets on Monday, Cingöz said, “They refuse to grant permission for campaigns we conduct in solidarity with the Palestinian people, generating baseless excuses each time.”

Claiming that the authorities aim to prevent Kimse Yok Mu from operating completely, Cingöz added, “What is being conducted against our association is discrimination, and this is opposed to the principles of equality, justice and our association’s constitutional rights.”

The charity’s president stated that Kimse Yok Mu had intended to provide aid to 2 million people in need, and that the latest reason given by the administration when rejecting its proposal was that the aid organization had previously been given an administrative fine. “I am not referring to any crime, but just one administrative fine. It is very comical that there were major irregularities regarding the fine that was given to us. There was no fault that would necessitate that fine at all.”

Kimse Yok Mu, which holds UN Economic and Social Council consultative status, is one of the largest providers of aid to the Palestinians. According to official data from the charity, in the aftermath of the 2014 Israel-Gaza conflict, also known as Operation Protective Edge, during which almost 1,000 Palestinians were killed, the charity supplied aid to more than half a million people in the region.

However, a smear campaign was launched against the charity after corruption investigations implicating leading figures in the ruling Justice and Development Party (AK Party) were made public on Dec. 17, 2013.

Turkey-based charitable organization, Kimse Yok Mu (Is Anyone There?), which has been a target of the Justice and Development Party (AK Party) government’s unwarranted smear campaigns, represented Turkey as a nongovernmental organization at a UN summit that ran from Friday through Sunday.