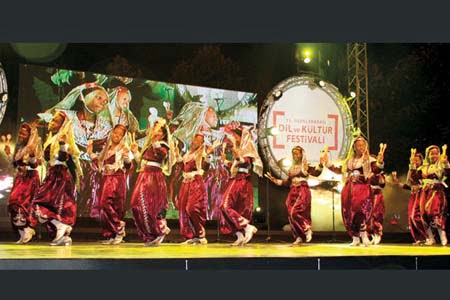 The 11th International Turkish Olympiad is being held from June 1-16. A total of 99 activities will be held in 55 cities across Turkey during this 16-day event. (Photo: AA)

Students who have arrived in Turkey from countries around the world for the 11th International Turkish Olympiad, which is a festival that celebrates the Turkish language and has brought together 2,000 students from 140 different countries this year, are building strong ties and lasting friendships and in turn raising hopes for world peace.

The Olympiad brings together hundreds of foreign students each year from Turkish schools established throughout the world, giving the world’s young people a chance to learn about other cultures and better understand people that come from other countries and have different religions, languages or skin colors. Getting acquainted with each other via the Turkish Olympiads, which are held towards the end of May and the first two weeks of June each year in Turkey, the students build strong friendships and continue to maintain their friendships for many years.

Commenting on the contributions of the Turkish Olympiad to world peace, Tuncay Öztürk — secretary-general of TÜRKÇEDER — told Sunday’s Zaman that the main goal of the Olympiads is to encourage those who are learning the Turkish language and the second one is to bring together young people from 140 countries with this common goal of peace.

“If we consider the motto determined for each year’s Olympiad, you can easily recognize how the concept of peace plays a great role in the organization. Mottos used in past years include “Come, let us all be friends,” “We are meeting through the language of love” and “Humanity hand in hand.” This year’s slogan is “Towards universal peace.” The theme is to create the opportunity to be able to understand each other through a means of communication, which is language. For example, students from two countries that were once engaged in a war came together here in Turkey and talked to each other without any anger, hatred or prejudice. They understand the problem was not with people, but with the government politics of their countries. These students see that other students from once-enemy countries are as innocent as they are; they share the same thoughts and speak the same language. This all increases the feelings of sympathy among the participants during the Turkish Olympiads.”

Pointing to the role of social media in maintaining the friendships that are built during the Olympiads in Turkey, Öztürk stated that the students get to know each other in Turkey and maintain their friendships online, in particular using social media networks such as Facebook and Twitter. “There are students who are still in touch with their Olympiad friends even though several years have passed since their visit to Turkey for the Olympiad. …. We don’t put forward very large claims such as establishing universal peace, but create the opportunity for students to get to know each other. We just do our part in promoting peace all around the world as much as we can. We try to show we are in favor of world peace. We try to make the students attending the Turkish Olympiad be aware of global peace and tell them to be in favor of peace instead of conflicts or war,” Öztürk noted.

A letter by a Kosovar student, Dafina Alishani, is a good sign of how the Turkish Olympiad contributes to world peace. Alishani, who attended the fifth Turkish Olympiad in 2007, talks about her feelings about Serbian students attending the Olympiad. She says: “When you mention the name Kosovo, the first thing that comes to mind is Serbia and war. Can you imagine that an Albanian student says good morning to a Serbian student during breakfast or even that an Albanian and a Serbian student can eat at the same place or pose together for a picture? If someone had told me to do the things that I mentioned above before I attended the Turkish Olympiad, I would have never believed them. However, I did all of these things. I even tried to understand where the hatred inside of me went, how it disappeared suddenly. Then, I read ‘the language of love and the language of peace’ on the banners hung on the walls opposite to me and understood there was no place for hostility, hatred and disrespect at the Turkish Olympiad. I drew a lesson from this incident.”

An Angolan student competing in the Olympiad this year, Adjoane Suria Ferreira de Gouveida Leite, told Sunday’s Zaman that she has made many friends from various countries such as Venezuela, Brazil, Estonia, Nigeria, South Africa and Panama since she first came to Turkey on May 25. Leite says: “I think the Turkish Olympiad supports world peace as many people from very different countries come together, spend time together and build friendships with each other. They learn from each other and understand different cultures.”

Leite’s teacher, Arzu Ak — a Turkish teacher working at a Turkish school established in Angola — told Sunday’s Zaman that the students hug each other without considering language, religion, culture or skin color differences during the Turkish Olympiad. “The friendships established in Turkey during the Olympiad don’t end when the Olympiad ends. They keep in touch online and even visit each other’s countries. These students never think about the skin color of any student while establishing friendships. It is really very nice to witness such events. Such events raise our hopes for world peace in the future,” Ak noted.

Yasmin Saleh from Ethiopia told Sunday’s Zaman that many people with different languages, cultures and religions come together around a common language during the Turkish Olympiad. Stating that she has made many friends during the Olympiad, Saleh says they speak in the Turkish language and they will continue to keep in touch and continue to speak Turkish with each other in the future.

Saleh’s teacher, Dilber Öz, who has been working as a teacher at a Turkish school in Ethiopia for one year, told Sunday’s Zaman that students from two countries that were once at war build strong friendships without considering the situation between their countries. “These students are rivals. They are supposed to be competing with each other, but they never do this. On the contrary they try to support and help each other. I think this is also very important,” Öz said.

The 11th International Turkish Olympiad is being held from June 1-16. A total of 99 activities will be held in 55 cities across Turkey during this 16-day period. The large inauguration ceremony was held to mark the start of the Olympiad in Ankara on Saturday and included the participation of several ministers and many other high-ranking government officials as well as about 20,000 spectators.