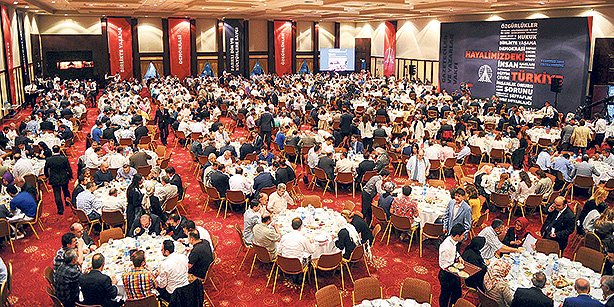 The Journalists and Writers Foundation held its traditional iftar at a hotel in İstanbul on Tuesday night with the participation of about 1,000 people. (Photo: Today's Zaman, Üsame Arı)

Roughly 1,000 people attended the iftar, which was organized by the GYV for the 21st time. The iftar was attended by many prominent figures, including Zaman Editor-in-Chief Ekrem Dumanlı, Cihan news agency General Manager Abdülhamit Bilici, Samanyolu TV General Manager Metin Yıkar, World Ehl-i Beyt Foundation President Fermani Altun, writer Yavuz Bülent Bakiler, former deputies İlhan İşbilen and İdris Bal, and many other journalists, academics and businesspeople. The iftar was also attended by some family members of police officers who have been arrested in government-backed operations and some families of the 301 mineworkers who were killed in a mining disaster in Soma last year.

Delivering a speech at the event, GYV Vice President Cemal Uşşak talked about the importance of being hopeful about Turkey’s future. “We believe that every beautiful step, every useful project begins with hope. There will be a time when democracy is fully settled [in Turkey] and goes beyond the ballot box; it will be the strongest feature of our politics. There will be a time when the law will be superior to personal political choices and be a guarantor of rights and freedoms. The judiciary will be a center of solutions as an independent and impartial body. … We are hopeful that there will be no problem of poverty. Accountability and transparency will be the most important political criteria,” Uşşak said in his speech, adding that there would be no workplace accidents or cases of domestic violence in the Turkey of his dreams.

Public confidence in the judiciary was deeply shaken in Turkey following the eruption of a corruption scandal in December 2013 in which senior government members were implicated. In an apparent move to cover up the graft claims and consolidate its power, the Justice and Development Party (AK Party) government has since taken many controversial steps that have weakened the independence of the judiciary and restricted individual freedoms in Turkey.

“There will be a time when those polarizing society and those who move away from each other today will sit around tables of brotherhood together. Just like today, a harmony of different colors will be possible,” Uşşak said in further remarks.

The eruption of the corruption scandal also led the AK Party government and then-Prime Minister and current President Recep Tayyip Erdoğan to employ highly polarizing and divisive discourse against its critics, in particular against the faith-based Gülen movement. Erdoğan accuses the movement of masterminding the corruption probe, while the movement strongly denies the claim.

The GYV is an institution inspired by the teachings of Turkish Islamic scholar Fethullah Gülen, who also inspired the Gülen movement.

A message from Gülen, who is the honorary president of the GYV, was also read at the iftar. Gülen talked about his dream of a Turkey where people of all views are respected, morality dominates and where the country acts as a force of stability in the world with its spirit of unity and solidarity at home.

Some family members of Soma victims offered their thanks to the GYV for their invitation. Naciye Kaya, who lost her husband in the tragedy, said she was very pleased with GYV’s invitation, adding that she is still seeking justice for her husband. “Our pain will never go away. We are looking for justice. Will justice be done in our case? I don’t think such a thing will happen in Turkey,” she said.

Elif Atayün, the daughter of former Police Chief Yurt Atayün, who is among dozens of police officers arrested in government-backed operations, was also among participants at the iftar. She said she and other family members of the arrested police officers want to see democracy and the rule of law working in Turkey again and to be reunited with their loved ones, who have been kept in jail for more than a year without an indictment being ready so far.

The GYV was established in 1994 and its mission and work are inspired by Gülen, who is known for his teachings of “hizmet” (“service” in Turkish), tolerance and dialogue. The GYV has two main principles: respecting differences and coming together. The foundation works to enrich humanity and enhance the culture of coexistence by undertaking projects that emphasize dialogue, mutual understanding and tolerance to establish global peace. It is also interested in issues that concern journalists and holds discussions on topics such as democracy, human rights, secularism and globalization.