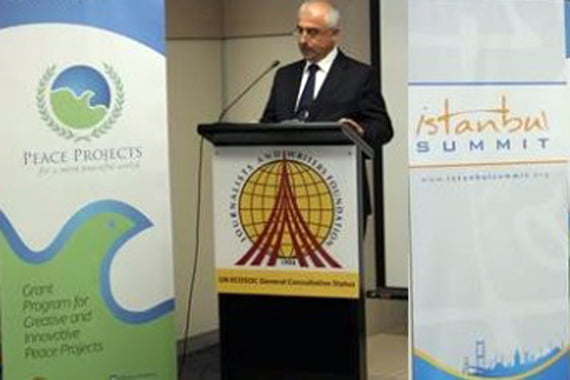 A reception was held by the Journalists and Writers Foundation (GYV) on September 30, 2013 in New York to promote its two international projects, Istanbul Summit and Peace Projects. Numerous representatives to the United Nations (UN) who came to New York to attend the 68th UN General Assembly meeting as well as journalists, academics and foreign diplomats were hosted at the GYV office on the 5th Avenue. Chief of Nongovernmental Organizations (NGO) Branch of the UN Economic and Social Council (ECOSOC) Adrei Abramov, Permanent Observer to the UN Narinder Kakar, Press Counselor of the Permanent Representation of Spain to the UN Florentino Sotomayor Basabe and Adviser to the Permanent Representation of Saudi Arabia to the UN Maisah Sobaihi attended the reception.

Delivering an opening speech at the reception, GYV President Mustafa Yeşil explained the activities the Foundation is conducting to promote dialogue and coexistence. Yeşil noted that the GYV is the only NGO from Turkey that is in the consultative status with the ECOSOC and it has opened two branches –in New York and Geneva– since it obtained this status in 2012. Referring to the significance of the Foundation’s international projects, Istanbul Summit and Peace Projects, Yeşil indicated that the GYV will continue to closely monitor the agenda of the UN and develop projects for promoting this agenda. Then, presentations were made to introduce Istanbul Summit and Peace Projects.

Istanbul Summit is a project developed by the GYV to organize summit meetings among NGOs. The first meeting of this project is titled “UN Post-2105 Development Agenda from the Perspective of Women” and planned to be held in May 2014 in İstanbul with participation of women NGO representatives, parliamentarians and women leaders. The GYV is further planning to crown its 20-year experience in coexistence and dialogue with its Peace Projects Grant Program that will provide feasible peace projects with funds amounting up to $50,000.