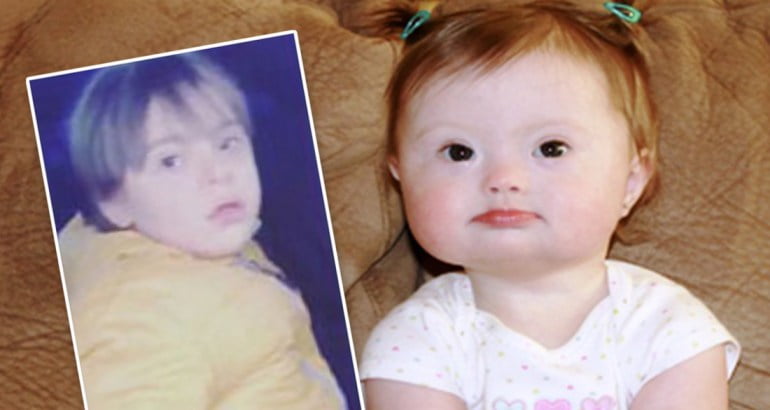 There are so many heartbreaking cases of torture and ill treatment in Turkey, a member of the Council of Europe and a candidate country to the European Union, where expecting mothers were detained in crowded cells with little or no access to health care, and new born babies snatched from the arms of their mothers who are rushed back to prison right after the delivery.

Two cases that were exposed to the public recently have revealed that children with a Down Syndrome also suffer from this persecution pursued by the Turkish government against groups seen critical and opponent of the repressive regime.

Ayşe Sena, a two-year old baby girl with a Down Syndrome, was separated from his father, T.B., when police came to detain him on Oct.7, 2016 on trumped charges. He was formally arrested later and transferred to a jail with no indictment and conviction rendered against him. No trial date is set for his case either.

Baby Sena, diagnosed with heart problems and difficulties for her motor functions, was left to the care of her loving mother R.B. In its report issued April 11, 2016 by Istanbul-based Avcılar Hospital, doctors concluded that baby Sena needed the support and the utmost care of her mother to live because she suffers from pulmonary heart troubles that are common in kids with Down Syndrome. Another report by Istanbul Cerrahpaşa Medical School on June 8, 2016, a team of doctors also concluded that baby Sena has issues with body motor function and mental development.

Unfortunately, the saga of baby Sena turned from bad to worse when police came to detain her mother too on Nov.23, 2016. She was kept in detention for 20 days without a charge. St the end of long detention, she was formally arrested by the investigating judge who disregarded hospital reports about the need for caring for baby Sena.

Separated from both her father and mother, baby Sena’s conditions deteriorated rapidly. She was rushed to the emergency on Jan.23, 2017 and placed in intensive care unit (ICU) at Bağcılar Medilife Hospital. She suffered from serious health troubles including heart, lung and kidney failures. Doctors were able to stabilize her but she had spent 20 days in ICU.  Now she is out of the ICU, but her treatment is still underway at the hospital without her parent’s presence.

In another case, a mother of five that included a boy with a Down Syndrome was detained while she was visiting her husband who was jailed on charges of alleged links to the Gülen movement. When she got detained on the spot during the prison visit, five kids including the boy with a Down Syndrome were left stranded in a car in the parking lot of Sincan Prison in Ankara.

The video showing five children left alone in tears in front of prison after their mother was detained went viral in social media, prompting outcry. “Leaving children alone in such a situation is against the Convention on the Rights of the Child and all related laws. We will follow this issue,” said Mahmut Tanal, a deputy from the Republican People’s Party (CHP) and a member of the Human Rights Commission in the Turkish Parliament.

In the video a child opens the door of a car in the prison parking lot, showing his brothers crying, and says in tears, “We are five brothers, left alone. We have a handicapped brother. I commend those people to God’s punishment.” The boy with a Down Syndrome, sitting in the backseat of the car, appears to be scared. He looks to be at the age of five or six.

The mother, identified with her first name Nagehan, was later transferred to another prison in Tokat, which is hundreds of miles away from her children in Ankara. A fund-raising campaign was launched in the US to help the family and she was later released on TL 50,000 ($14,000) bail.

In both cases, parents were accused of false charges of terror because of their alleged links to the Gülen movement which is inspired by the US-based Turkish Muslim intellectual Fethullah Gülen who has been advocating science education, interfaith and intercultural dialogue and community contribution.

He has been a vocal critic of Turkish government and President Recep Tayyip Erdogan on massive corruption in the government as well as Turkey’s aiding and abetting of radical groups in Syria.

Erdogan launched an unprecedented persecution against Gülen and his followers in December 2013 right after major corruption probe that incriminated Erdogan’s family members.

Turkish president vowed to show no mercy towards followers of Gülen and orchestrated the arrest of over 45,000 people in the last six months.

The ruling Islamist leaders labelled the movement as ‘FETÖ’, a terrorist organization, although Gülen, 75-year old cleric, and his followers have never advocated violence but rather remained staunchly opposed to any violence, radicalism and terror in the name of religion.