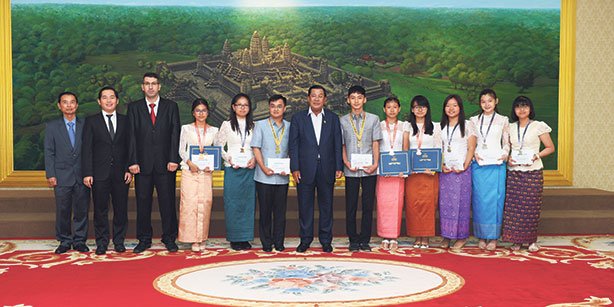 Turkish schools established by educational volunteers affiliated with a movement inspired by the teachings of Turkish scholar Fethullah Gülen receive widespread praise due to the quality of the education they provide internationally.

The GENIUS Science Olympiad was founded and is organized by Terra Science and Education. The first of these competitions was hosted by the State University of New York at Oswego in 2011, where the event is still held. This year, 1,176 projects representing 69 countries were included in the competition.

According to the Cihan news agency, students from the Zaman High School in Cambodia received two gold, four silver and three bronze medals for 10 projects they designed.

The Cambodian prime minister also wished the students continued success and expressed contentment, saying, “I’m proud of these students.” After having photos taken, he awarded each student who won a gold medal $3,000. Those who won silver medals received $2,000, and those who won bronze medals received $1,000. The prime minister also revealed that the students will be awarded by the Cambodian Ministry of Education, Youth and Sport.

Since the first Genius Olympiad in 2011, students from the Zaman High School have won 24 medals in total: six gold, 10 silver and eight bronze.