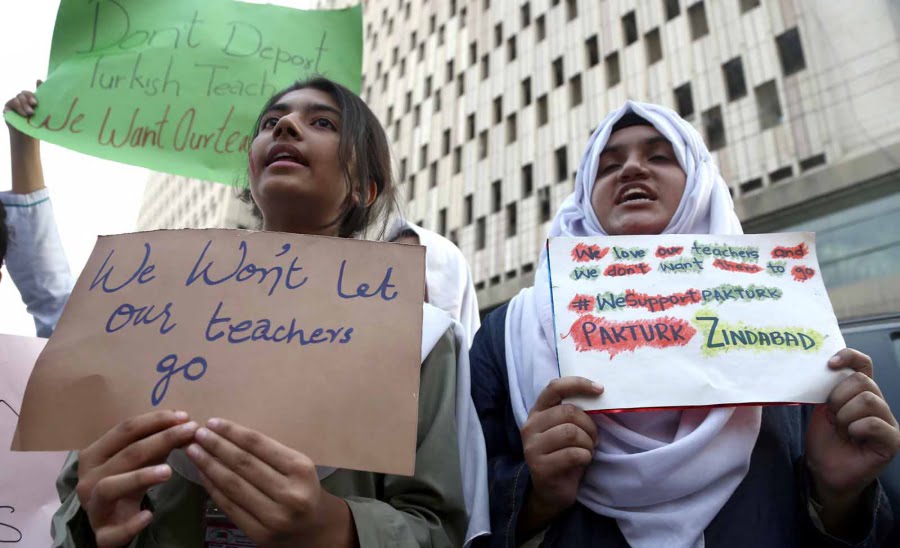 Parents of students studying in the Pak-Turk International Schools on Friday slammed the government’s decision of deporting Turkish teachers and staff from the country, terming it ‘open injustice’.

The parents claimed that the decision was taken by government of Pakistan to please the Turkish president. They expressed these views while addressing a press conference at Lahore Press Club.

Score of students along with their parents also staged protest outside Lahore Press Club against the government directions to Pak-Turk school staffers to leave the country by November 20.

Parents showed anguish while briefing the media and said that they saw the dark future of students if Turkish teachers leave the country.

“Students have reached their final terms, and by the start of next year they will appear in their final exams and in such circumstances the departure of their teacher will cause a big loss to their studies” they maintained.

They said “Pak-Turk Schools were founded without any financial assistance of Turkey and Pakistani government but founded by the philanthropist donations of people of Pakistan and Turkey” adding that these schools were the property of Pakistani people.

They alleged that both Pakistani and Turkish governments were playing politics on these institutes. “Turk teachers have always been worthy of praise because of their selflessness and dedication in coordinating humanitarian assistance”, they said and added that it was the result of Turkish teachers’ efforts that the students have been able to achieve excellence.

“The decision to deport the Turkish staff was made when one king sent a message to the other”, they said. They said that it was being alleged that Fatehullah Golen was behind these schools and if he was a terrorist then why Pakistani government failed to find this out in all these years” they said.

The parents were of view that Turkish staff preferred to stay in Pakistan during the times of difficulties and now the government’s act is to humiliate them.

Currently, 26 Pak-Turk schools are working in Pakistan with 11,000 students while there are 1100 Pakistani teachers and 110 are from Turkey.

They asked requesting government not to send back those Turk teachers as they served for Pakistan as they not just taught syllabus but high moralities to the students.

In response to a question, the parents replied that Turkish teachers could not join them for the press conference as they were busy packing for home.

Before the press conference, students, their parents and Pakistani teachers of Pak-Turk schools staged a protest against the decision of deportation of Turk teachers and staffers. They were carrying placards inscribed with slogans against the government.

Enes Kanter: This month, my dad will face trial in Turkey for “membership of a terror group.” He is a university professor, not a terrorist.