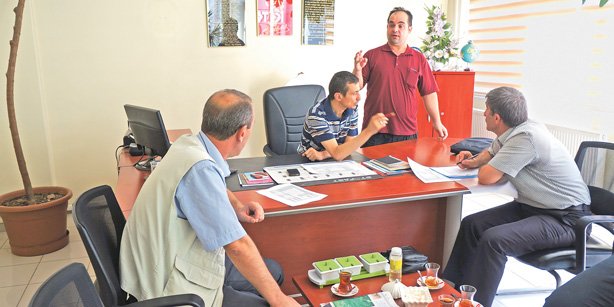 The police officers from the Anti-smuggling and Organized Crime Unit were accompanied by inspectors from the Ministry of Finance, the Ministry of Food, Agriculture and Animal Husbandry, the fire department and the Social Security Institution (SGK). According to the Cihan news agency, Mehmet Güzel, a lawyer representing the FEM schools, was also present during the inspections.

Güzel said: “We object [to the raids and inspections] and we have issued a statement to this effect. These inspections are aimed at destroying these institutions’ ability to operate. These unlawful inspections are hurting and disappointing the people [of Turkey].”

In a similar move, Gülen-inspired private schools and exam preparation schools in Iğdır have been temporarily shut down as a result of an inspection carried out by auditors from the Iğdır Provincial Directorate for Education. The schools were closed down on charges including “carrying out unauthorized educational activities” and “the use of educational areas for other than their intended purpose.” The FEM prep school in the city will remain closed for one month, while the private İbrahim Avcı Elementary School was given a two-month ban.

Police officers and inspectors also conducted raids on Gülen-inspired schools in the Çanakkale and Niğde provinces early on Wednesday. Okan Yıldırım, a lawyer representing the Private Sungurbey Education Institutions in Niğde, told Cihan: “The inspections were carried out at the beginning of the registration period even though they could have been done at any time of the year, suggesting that they are not above board. When you bear in mind that [other] private schools in Niğde have not been inspected, it is clear that the inspections are out of the ordinary and ill-intentioned. As always, we went to great lengths to help the inspectors and, as always, our schools and company presented our records for inspection to those involved. We also saw that police officers were unnecessarily accompanying the commission established on the order of the governor’s office. Just as before, our schools have emerged from the inspections without a stain on our character.”

Stating that the inspections are exclusively targeting Gülen-inspired institutions, Private Sungurbey Education Institutions Chairman Ahmet Korkmaz told Cihan: “These inspections are follow-ups on previous inspections. Our company has no legal or administrative faults. We are clean; [our institutions] have done nothing wrong. Everyone can inspect us. We are only educating students.”

The raids are part of a nationwide crackdown on institutions and individuals sympathetic to the Gülen movement, which is inspired by the teachings of Turkish Islamic scholar Fethullah Gülen. President Recep Tayyip Erdoğan has accused the Gülen movement of orchestrating a graft investigation that implicated him and his inner circle. The Gülen movement denies the charges. Since the allegations surfaced nearly two years ago, the authorities have escalated raids, shutting down or defaming institutions or individuals close to the movement.