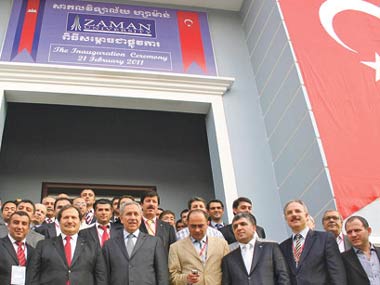 Zaman University was opened in Cambodia, a country with a 14-year history of Turkish education

Deputy Prime Minister Bülent Arınç has opened the first Turkish university in the Far East, in Cambodia, a country with a 14-year history of Turkish education.

“Our purpose is to serve the youth of this country,” said Arınç, who spoke on Sunday at a dinner held at the Nagaworld Hotel in Phnom Penh to celebrate the opening of the university.

“We believe that the valued youth of Cambodia will have access to a very good education at this university, will serve their country to elevate it, and will establish bridges of friendship between Turkey and Cambodia,” Arınç added. Cambodian Deputy Prime Minister Sok An thanked Turkish entrepreneurs for their initiatives in the area of education and remarked that two years ago he had asked them for an institution of higher education.

An shared Arınç’s sentiments and said the students will bring Turkey and Cambodia closer together. Zaman University Rector Erkan Polatdemir spoke about the qualities of the university and that it meets world standards in technology. He added that they opened departments at the university in which the language of instruction is English, considering the areas of professional needs in Cambodia.

Ali Kökten, chairman of the board of directors of the university and chairman of ZIS, said that their young students had successfully participated in the International Science Olympiad and returned with several gold medals.

Following the opening speeches, students from the international school sang songs in Turkish as well as in their native language. Opened in 1997, ZIS offers education to children from kindergarten to grade 12. All lessons are taught in English, Turkish and Khmer. The high school, which currently has 900 students enrolled, is housed in a newly built and designed building in Tonle Bassac, Phnom Penh. ZIS is certified by the Cambodian Ministry of Education and is a member of CIS (Council of International Schools).