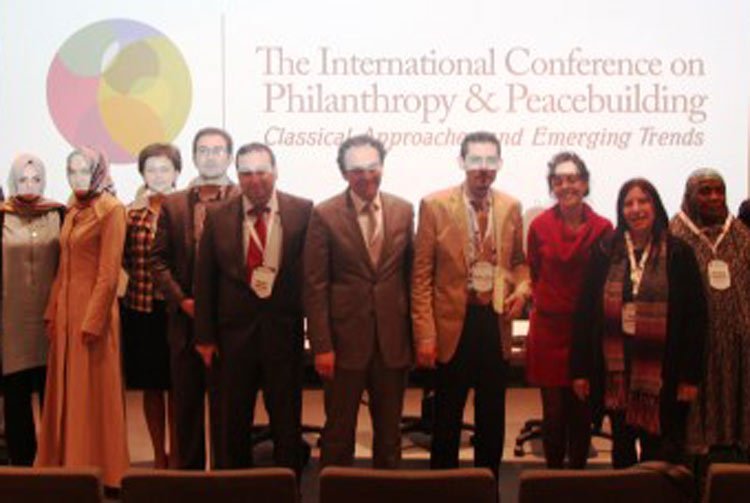 The Journalists and Writers Foundation (GYV) and Is Anybody There? Association (KYM) jointly organized the conference titled “International Conference on Philanthropy and Peacebuilding” between April 12-13, 2014, with participants from 19 countries including Russia, the UK, India, Nigeria and the Philippines. During the conference, the contribution of philanthropy to peace was discussed with emphasis on the philanthropic philosophy of the KYM.

In his opening speech, Professor Paul Schervish from Boston University indicated that the KYM found the key to the philosophy of philanthropy. Explaining that the KYM created a model for charity and philanthropy, Schervish said: “Actually, it tries to draw attention to basic needs. To this end, it asks a basic question: ‘Is anybody there?’ It asks this question and tries to get to the needy people.”

Noting that philanthropy should not be a concern exclusively for civil society organizations (CSOs), Schervish suggested that it should be maintained as part of daily life via nonprofit organizations. Moderating the session, “Cultural Values and Moral Grounds for Philanthropy,” Assistant Professor Önder Çetin, the head of Sociology Department at Fatih University, stated: “These efforts are actually intended for finding an answer to the question, ‘How should peacebuilding be performed?’ There are also efforts to solve the problem of what should be done to eliminate economic hardships of specific social groups or general economic problems as well as income inequality. This conference seeks to discuss philanthropy as a peacebuilding instrument in restoring social harmony among social groups.” Research assistant Ademola Adelekan talked about the philanthropic efforts in Nigeria. “70 percent of the public do not believe in the philanthropic work. Despite this negative opinion, many hold the view that this work is beneficial. Nigeria saw social and economic problems. We conducted studies with the most influential charities and philanthropic organizations,” he said.

The afternoon session of the conference was titled “Philanthropy, Social Entrepreneurship and Socio-Economic Development.” Professor Aykut Toros, the head of Sociology Department at Yeditepe University, defined the KYM as an association for servicing the society. “The KYM’s philanthropic work has become global. About one third of this work is conducted abroad. This work also aims to improve women employment and boost local manufacturing capacity. So far the KYM has helped numerous women and men to change their lives,” he said.

Speaking during the “Corporate Social Responsibility” session, Professor Maria Kyriakidou from American College of Thessaloniki in Greece, noted that Greece has been suffering from political and humanitarian crisis for the last five years. “The crisis has adverse effects and the cases of unemployment and suicide have skyrocketed. Thousands of Greeks are now unable to obtain even some basic medicine. In Greece, social responsibility has developed within the broad context of philanthropy. It has gone where the state was unable to go. Local administrations and CSOs are trying to fill this gap,” she said.

On the second day of the conference, the effective use of philanthropy in the peacebuilding processes was debated. Professor Luc Reychler from the KU Leuven in Belgian, underlined, “Peacebuilding is shaped by a leadership behind which one can stand.” Professor Karen A. Feste, the Graduate Director of the interdisciplinary Conflict Resolution Institute at the University of Denver in the US, stated, “Philanthropic work is a social responsibility initiative that boosts the standard of living of the society and the public.” Pointing out that charitable and philanthropic work should be strengthened in order to put an end to conflicts worldwide, Professor Feste said: “Violence and issues are everywhere around the world. We need to try to understand how to make the best us of philanthropy to this end.”

Professor Laurent Goetschel, the director of the Switzerland-based Swiss Peace indicated that they conduct both theoretical and practical work in Switzerland regarding philanthropy. Maria Elisa Pinto García, the executive director of the Colombian relief organization Prolongar Foundation, maintained that philanthropy work may be conducted in a more efficient manner by ensuring that non-profit organizations (NPOs) are managed like business companies. “We can improve philanthropy if we change the language we use and perceptions,” she said.

Speaking during the session titled “Philanthropic Institutions/Philanthropy in Peace Education,” Ahmet Erdi Öztürk from Barcelona Autonoma University, suggested that current victimizations may be eliminated with the help of education. “The victimization arising out of the hash economic conditions of our time may be eliminated by raising awareness via education. There are many examples about how this can be done. The Hizmet movement offers a good case for study. ‘High level education will increase the social responsibility in the face of problems,’ Mr. Fethullah Gülen had said in this context,” he noted.

Speaking about the relief work conducted in the wake of the devastation caused by a super typhoon in the Philippines, Henelito A. Savilla, from the Asian Center, University of the Philippines Diliman, said: “If the government has assumed the full responsibility for the relief work in the wake of the typhoon Haiyan, it would be impossible for it to reach out to victims everywhere. Based on our experience, we can say that the local government wouldn’t be able to conduct effective relief work if other countries had not come to the rescue.” Praising the relief work conducted by Turkish philanthropists in the Philippines, Sevilla noted: “Turkish people won the hearts of Filipinos. Is Anybody There? Association was the first charity that came to our rescue. Turkey is a faraway country, but it seems that they came to our country before the disaster with a foreboding.” Sevilla added: “With the assistance they provided in our country, Turkish people put an end to the Philippine perception, ‘Muslims will help Muslims only’. Turkish people extended a helping hand to Filipinos regardless of their religious or political views.”

The Journalists and Writers Foundation Intercultural Dialogue Platform organized a panel entitled “An Experience of Co-Existence: The Example of Istanbul and Şanlıurfa”, which took place in the city of Şanlıurfa. Religious representatives from the Armenian, Jewish, Assyrian, and Catholic communities expressed their thoughts on Turkey opening its doors to dialogue. The panel brought together the […]