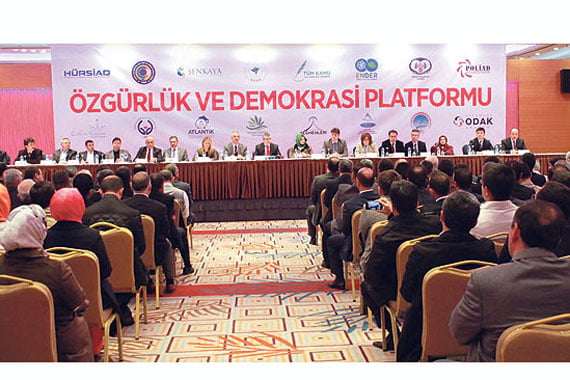 Members of the Freedom and Democracy Platform on Monday held a news conference at a hotel in Ankara concerning plans to close down prep schools. (Photo: İHA, İlker Turak)

The government’s intentions to shut down private examination preparation centers [in Turkey] in spite of a strong backlash from educators, economists, students, parents and even terrorism experts brings back memories of the authoritarianism of the early years of the republic, when a single-party regime was in place.

Issuing a joint statement in İstanbul’s Bakırköy Square on Monday, owners and teachers of prep centers said that the planned move would only worsen the quality of education in Turkey. Talking on behalf of the sector, the founder and CEO of Final Preparatory Schools, Zeki Çobanoğlu, said: “Students, parents and teachers will all become victims with such a move. Closure would only cause chaos in education.”

The protestors said the existence of prep centers, or prep schools, is due to public demand and necessities born out of problems in education, and declared that civil society groups do not approve of the current draft — which will ban such institutions — being enacted into law as it is. “If it is enacted, we believe that this will be a decision reminiscent of the single-party period as far as fundamental rights and freedoms go,” the statement said.

Protesting the draft law unveiled by the Zaman daily last Thursday, students from leading prep centers including Final, Birey, Murat, Koç, İlgi, İhtiyaç and Sınav carried banners reading “Do not take my right to free education in prep centers” and “I would not have scored highly in the exam if it had not been for the prep centers.”

Çobanoğlu said that no family should be forced to take private tutoring through illegal means as it is a matter of personal choice. “Closing the prep centers would mean letting the well-off go to college while depriving the people of Anatolia from integrating with the modern world,” he commented. He also stated that since the closure would be unlawful, they would appeal such a decision in the Constitutional Court and the European Court of Justice (ECJ).

A member of the İstanbul Chamber of Commerce (İTO) Education Commission, Turay Keser, said on Monday that the draft law is not reasonable. “There are 700 prep centers represented in İTO, but nobody asked for our opinion while preparing this draft,” he stated.

Making a written statement on Monday, CEO of the Ankara Chamber of Commerce Salih Bezci said that “the need for prep centers should be eliminated first” before shutting them down. Stating that the “freedom of private enterprise” is protected by the Constitution, Bezci said that such a plan violates freedom of enterprise.

In İzmir, CEO of the Pi Analitik Preparatory Centers Yıldırım Şahin described the move as an “eclipse of reason” and said that no private enterprise could be shut down by the government since this only happens in closed and anti-democratic regimes.

Providing examples from private prep centers from Japan and Greece, Şahin urged the government to find solutions to the national education system, such as overcrowded classrooms, instead of targeting prep centers.

Representatives of prep centers also issued a statement in the eastern province of Van of Turkey and argued that it is in nobody’s interest to close down these educational institutions. The Director of Kavram Prep School in Van, Lokman Tekin, said on Monday in the Van Chamber of Commerce that hundreds of thousands of employees will lose their jobs if prep centers are shut down. He added that prep centers also pay taxes to the government.

In Mersin, a southern province of Turkey, 96 nongovernmental organizations made a joint statement and said that closing down the prep centers would lead to irreversible mistakes in education.

The president of Mersin Intercultural Dialogue Center (MEKADİM), lawyer Erdoğan Günal, said that the draft is against the preamble of the Constitution as well as the Articles 10, 27,42 and 48 which regulate equality under the law, right to science and art, right to education and right to work and have a contract, respectively.

Günal said that even enacted, such a law would be overruled by the Constitutional Court, but due to the slow judiciary system in Turkey, in the meantime students would suffer the consequences and urged the government to not to consider such a draft in the first place.

Günal said the proposal to hire the teachers of prep centers in state schools is against the equality principle of the Constitution since there is already a long waiting list in the state institutions. It also emerged that the draft law included a proposal to hire teachers of prep centers to government jobs through an interview process although all other teachers are hired by a centralized exam. Criticizing the planned interview method for hiring teachers, Günal said that it would be open to abuse.

Prep centers a result of supply-demand in free market economy

In the southeastern province of Bingöl, a parent of four children, Yusuf Sezgin, said that he could only afford for one of his children to attend a prep center and he was the only one who did well enough to pass the university placement exam. “My other children are workers. They all went to the same high school. If prep centers are not necessary, why could my other children not get into college?” he asked.

A mother of four, Selvihan Kanar, who cannot even afford her rent and electric bill, said that her children receive education services at the free reading halls. “Had it not been for these places, my children would be throwing stones at the police like their peers here,” she commented.

In the southwestern province of Burdur, Justice and Development Party (AK Party) Burdur deputy and Vice President of Local Municipalities Hasan Hami Yıldırım said on Monday that the prep centers and study centers could only be closed once they are not needed anymore, not through force or state power.

“In particular, study centers that provide a service free of charge and on a voluntary basis could be excluded from the draft,” Yıldırım said as he added that in free market economies, institutions emerge as a result of supply and demand.

Yıldırım added that the need for prep centers could only be minimized when the education system is able to provide equal quality education across Turkey.

The Karapınar Industrialists and Businessmen’s Association (KARSİAD) head Şenol Mutlu said that they could not make sense of the government’s move to shut down prep centers, study centers and free reading halls. “We will continue to support children with limited financial means, but the destinies of millions of children are at stake,” Mutlu commented. He asked how the students of state schools would compete with those from private schools without the help of the prep centers.

President of Aydın Association of Preparatory Schools (AYDERBİR) Ali Karimiş said that many people are against the government’s move as he said that if prep centers are closed, private tutors would work illegally without paying taxes. He said that prep centers provide equality of opportunity to poor children. He urged the government to stop the attempt to close the prep centers.

Poor children will lose their chance for competition

In a similar reaction, a former mayor of İzmir, Burhan Özfatura, said on Monday that there is nothing positive about such a draft law and it would make the education system even worse. “The closure of prep centers will lead to unfair competition and the black Turks of Turkey will lose their chance [to climb the social mobility ladder],” he further commented.

Özfatura argued that Education Minister Nabi Avcı has been struggling to create the impression that such a draft does not exist. According to Özfatura, this attempt is an operation against the Gülen movement.