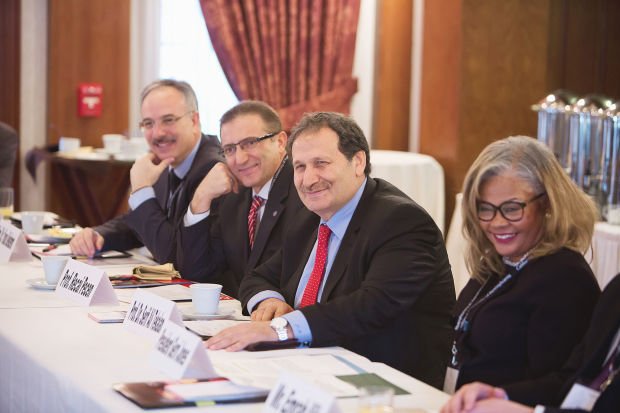 “Building Bridges Through International Cooperation: An International Event” was sponsored by Cal U in cooperation with the Turkish Cultural Center of Pittsburgh.

A daylong series of activities organized by the Office of International Programming focused on opening doors to study abroad opportunities, student and faculty exchanges, internships and cultural collaboration. Events included a forum attended by Cal U students, faculty and staff.

“In our increasingly globalized society, the day-to-day conduct of business and civic affairs puts us in contact with people of many different backgrounds,” Jones explained. “Academic institutions have a responsibility to prepare students for this progressively borderless environment. And our campus becomes a richer cultural and intellectual environment when it includes people of varying backgrounds and differing points of view.”

Many of the education leaders are part of a movement based on the teachings of Fethullah Gulen, a worldwide civic initiative rooted in the spiritual and humanistic tradition of Islam.

The focus of the Gulen or Hizmet movement is to unite humans and creating bridges between the Muslim world and the West and the poor and the wealthy by embracing and practicing certain values, spiritual and material, such as love, tolerance, human rights, democracy, synthesizing science and religion.

Education is the pivotal service field in the movement that begins teaching tolerance to young students in Turkey, and in more than 1,500 schools around the world, in hopes of creating acceptance of cultural differences across the globe.

Through the Peace Island Institute, a non-profit organization, educational leaders are hopeful to create realms of co-existence.

“Forget about politics, issues and anything that has hatred in it,” said Professor Recai Pecen, president of North American University, the event’s guest speaker.

He explained the moderate-Muslim movement cannot promote or tolerate terrorism and should separate the relationship of state and religion.

Pecen said Hizmet projects in Turkey incorporates, in addition to schools and universities, banks, hospitals, and media to deliver the message that Gulen taught — give and serve to please God.

“He believed as you give, God gives you more. Dialogue is not a luxury it is a necessity to deliver the message,” said Pecen.

Dr. Serif Ali Tekalan, rector at Faith University explained universities should operate outside of politics in order to help students accept cultural differences in a globalized world while teaching a dedicated service to humanity.

Tekalan showed a photo of a homeless Turkish woman and her children.

“It’s not just taking a photograph of her but learning from the photograph,” Tekalan said.

The movement teaches that a perfect and exalted human being is formed through science, humanities and religious teachings that operate together and complement one another.

“The world is a big but sometimes not a big as we think,” she said.

Cal U has a memorandum of understanding with 20 international universities including Fatih University where Jones spoke at commencement exercises in June, where she said she felt at home.

“All these feelings of goodwill and how we connect and build relationships began because of the common bond of education,” Jones concluded.

Dr. Phyllis Bernard: “My speech was as much as anything else a ‘Thank you’ to the Hizmet Movement.. for making an incredible opportunity available for scholars, researchers, practitioners to understand a lot more about what stewardship in business is about. Hopefully as we continue to teach people about how business works in different places around the world, we’ll have a lot more respect and understanding for the kind of Islamic cultural values that one finds everywhere. And our entry way for that were the Hizmet Movement businesspeople; they were astoundingly fine.”