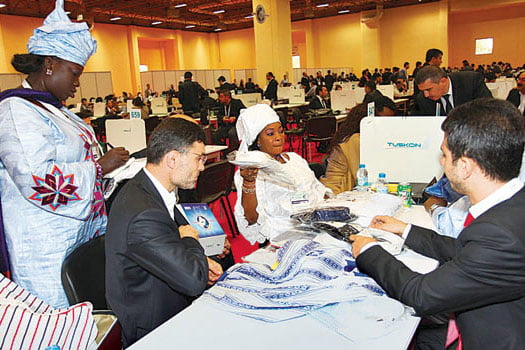 South African and Turkish companies that were present to build one on one business ties at the Turkey South Africa Trade and Investment Forum on Tuesday expressed that their main aim is to expand their businesses on the continent with partnership from both sides.

Speaking to Today’s Zaman during the forum which was organized by the Turkish Confederation of Businessmen and Industrialists (TUSKON) in İstanbul, Virginia Morule, the managing director at Agro Tractor House, noted that Turkey is more advanced in agriculture than South Africa and she would like to offer partnerships to Turkish businesses for manufacturing larger farming machinery and investing in the future of the country as well as the whole region. She said she certainly believes Turkey has the capacity to meet her company’s expectations.

Mammie Seane of Uhuru Apparel remarked on the quality of Turkish textile products and said she has been following the Turkish textile and fashion sectors very closely. Noting that she is very fond of Turkish clothing, she explained that her business plans with Turkey includes purchasing Turkish apparel and selling them to retail customers in South Africa and the neighboring African countries.

In addition, Turkish businesses looking for new market opportunities such as Elko Electrics commented to Today’s Zaman that, as a result of high energy needs, the company is interested in manufacturing systems to provide electricity distribution in South Africa.  Deputy General Manager Ozan Güreç said, “It is a new market and it will possibly allow us to advance into other countries neighboring South Africa as well.”

Representatives from DNN textiles which manufacture men’s clothing and shoes mentioned that they already have six clients in the country, adding that they came to the forum to increase their clientele. İsmail Öztürk from Asess, which produces testing machines for electronics, said that in addition to their existing customers in South Africa, the company is seeking to open distribution offices in the country to serve the sub-Saharan region.

Commenting on their business plans, Tülin Terzioğlu, head of Mikrosay Electronics, said their main strategy is to sell their manufactured electronic devices to the country. Enes Molu of Molu Jewelry expressed an interest in meeting with diamond producers as South Africa is the world’s largest producer of this gem and the prices are more reasonable when the purchase is made directly via the producer.

Meanwhile, Peggy Mahlaba, the managing director at Imbokotho Engineering, explained that she has done exclusive research on Turkey and discovered that although the country has achieved a rapid growth rate, it was unable to meet the requirements for infrastructure and technology. She stressed that as the consumption is increasing, the infrastructure is lacking, and energy is under pressure, thus the destitute suffer the most.

Stating that her company specializes in providing alternative power supplies to buildings by using green energy and producing power independently with DC Micro Grid technology, she said her company would like to share its experience with Turkish companies. She mentioned that she already had contacts with a Turkish cement maker to develop a system that would enable the cement factory to produce its own power. She highlighted the fact that her company has built buildings in Botswana, at local universities in South Africa as well as worked with the South African department of energy to spread the use of quality cement.

Both governments continue to strengthen ties

Addressing her audience, South African Deputy Minister of Trade and Industry Elizabeth Thabethe stressed that South African businesses are very happy to engage with Turkish companies and said such meetings continue to strengthen the economic relations that have been active between the countries since 2005.

Noting that global growth is now dependent on emerging economies and the global trade patterns have been changing, she said, “collaborating with countries like Turkey will take us further.” She stated that South African companies also contribute to development on the continent and the lucrative opportunities South Africa offers to investors would also lead to further business prospects on the continent. The deputy minister highlighted the fact that Turkey’s extensive knowledge in the textile and mining sectors would help advance bilateral ties. The Turkish Deputy Minister of Economy Mustafa Sever emphasized that South Africa is an excellent example of development – an industrialized nation with a reliable business environment and urged Turkish companies to take advantage of incentives in South Africa’s priority sectors such as energy, information, communication, technology and agro-processing.

“Gülen-inspired schools have been operating in Nigeria for over 13 years now. This conference will put Mr. Gülen’s thought on the social and cultural map of this country,” Tamer Çopuroğlu, president of the newly founded Ufuk [Horizon] Dialogue Foundation, told Today’s Zaman.

Light Academy started as 8-4-4 system in 1998, in a small compound on Ngong Road in Nairobi, with eight students. The IGCSE system was introduced in 2001. It has now grown to accommodate 1,600 students in eight campuses, one in Malindi, two in Mombasa and five in Nairobi.