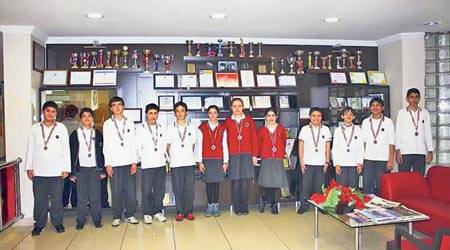 Students from Turkish schools who competed at the American Mathematics Contest-8 (AMC-8) won the most awards this year, the 26th year of the competition. Turkey’s private school Coşkun Kolej won 18 gold medals — awarded to those with a perfect score.

Speaking about his school’s success, Coşkun Kolej Principal Mehmet Kıcıroğlu said, “We see it as a sacred duty to raise the scientists of the future and represent our country in the best possible way abroad by forming special study groups.” He also said their high school students did exceptionally well this year at a national science olympiad organized by the Scientific and Technological Research Council of Turkey (TÜBİTAK). “Our middle school students continued that success at an international organization. We are happy to have earned our country a success that demands patience and hard work”

Emir Aziz, Muhammet Özdemir and Serkan Gülle, three gold medalists from the Florya Burç Kolej, said they were happy to have made Turkey proud. Burç Kolej Principal İbrahim Sözen said his students have been working very hard since last summer, adding that he was certain they would achieve great scores. “I would like to congratulate our students, their parents and our teachers who have all worked really hard for this achievement.”

Principal of the Bursa İnegöl Özel Safvet Elementary School Bayram Yayla said he was proud of his students. “We start preparing for math contests in the fifth grade and work very hard for competitions and similar projects,” he said. Bilecik Özel Sevgi Çiçeği Elementary Principal Muzaffer Bozkurt said his school had the bonus of being the only private school in Bilecik, adding that very serious and hard work was finally bearing fruit in the form of great achievements.

Erdoğan delivered a speech that will be remembered as a disgrace in political history as he referred to the struggle against the Hizmet movement.He not only confessed that the government has been tyrannizing certain social segments but also openly revealed future illegalities.