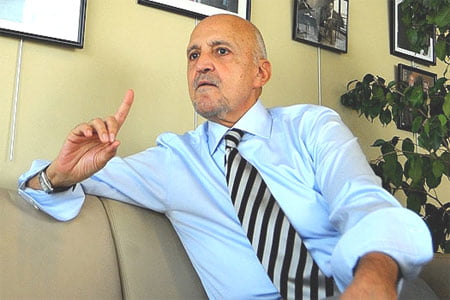 In 1997, uneasy with the presence of a conservative party — the Welfare Party (RP) — in government, the General Staff forced the party to step down. The event has since come to be known as the “postmodern coup.” The RP was later closed down.

Speaking to the Medya Mahallesi program aired by CNN Türk on Thursday night, Birand said: “They brought cassettes of Fethullah [Gülen.] And you [host of the CNN Türk program] broadcast those cassettes. Where did those cassettes come from? They came from somewhere.” The host of the program, Ayşenur Arslan, who declined to comment on the source of the video recordings, said: “They were sent to [journalist] Ali Kırca. I do not know how they were sent to him. But I would not tell you even if I knew.” In response, Birand said: “They told you to broadcast the cassettes. The General Staff told you to broadcast them.”

In the run up to the 1997 unarmed coup, some media outlets initiated a campaign against the movement inspired by internationally renowned Turkish-Islamic scholar Fethullah Gülen, by releasing video recordings of the scholar that later turned out to be doctored up by third parties in well-equipped studios. Gülen was tried in the Ankara 11th High Court for allegations of attempting to replace the secular order with Shariah law — allegations that were spread by the media. He was acquitted of all charges and the decision was later upheld by a unanimous vote in the Supreme Court of Appeals in March 2008.

In one of the voice recordings, some media outlets took one of Gülen’s sermons in which he had said, “You cannot say that the CHP [Republican People’s Party] is an infidel,” and broadcasted it without the first part of the original sentence, thus changing the meaning to something completely opposite.

The journalist’s remarks are a continuation of a series of confessions he has made over the last month. In a column on May 19, Birand said pro-coup thinking had penetrated the genes of a majority of members of the secular mainstream media. He believes that until the recently then mainstream media considered the General Staff as superior to democracy and Parliament. “We tolerated all coups. And we supported them. Our genes got confused in past years, and we started to look at things from a different perspective. The order between democracy and the Parliament and the General Staff changed for the first time. Democracy has moved one step forward.”

Birand later said the Republic of Turkey has had two big enemies over the years — pious Muslims and Kurds. According to the journalist, the military was traditionally provoked by secularist circles to stage coups in Turkey. “It has always been secular circles in society that pushed and forced the military for coups,” he said.

A Muslim religious leader, Fethullah Gulen, is daily in the news, as Turkish president Erdogan accuses him of plotting the recent coup, We are so used to Muslim clerics being or being considered terrorists that we give the matter little thought. And yet, the recent crackdown in Turkey on Gulen’s movement should be of grave concern to anyone who cares about the Middle East, about Islam, and about religion.