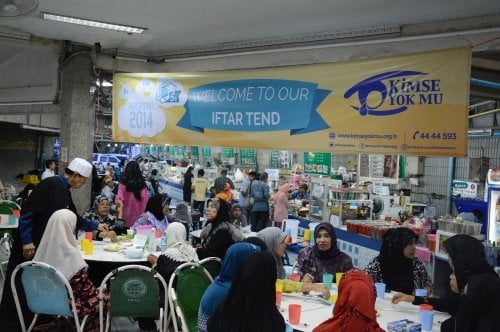 Extending a hand to all over the world, Kimse Yok Mu Foundation held yet another iftar dinner for Thai Muslims as a part of its Ramadan activities. Ramadan is different in Thailand from Turkey. Families choose to break their fast together with others at the mosques rather than doing it alone at home. What is notable in these iftar dinners is that everyone is voluntarily involved in setting and cleaning up the tables. Following the prayers and salawat before the adhan (call to prayer), Thai Muslims move on to break their fasts with water and dates. Next is salat al-maghrib (prayers after sunset) and then they go back to the tables to continue their dinner.

Kimse Yok Mu Foundation has been organizing trips to the Far East countries as a part of its Ramadan efforts. Some eight million Muslims break their fast all together in Thailand. The country has over four thousand mosques.

Volunteers of Kimse Yok Mu aid organization welcomed by minister in the many countries which they went to hand out meat to the needy families. In Guinea, Niger and Mali, ministers coordinated the aid and also some ministers joined the aid delivery to the needy families. In Guinea, Interior Ministry Botche Cande coordinated the aid as well as Minister of Family and Social Policies, Sanaba Kaba, he himself handed out meat packages.